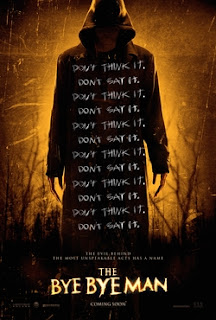 Following an opening scene set in the late 60s of a man who has seemingly lost his mind and is on a rampage through the neighborhood with a shotgun killing several people before himself in a scene that looked and felt like it was ripped straight from the reels of It Follows. Fast forward to present day and three college students move in to an old house off campus where they're quickly haunted by strange entity called The Bye Bye Man who will haunt your dreams and play mind games with you until you commit horrible acts simply for uttering his name. If you hear his name spoken or speak it out loud yourself you're also cursed with this demon. Sounds like a more PG-13 version of It follows almost, right?

Well that's where the similarities end because THE BYE BYE MAN is among the worst horror films I've ever seen in theaters. It borders on, but sadly never quite gets to so bad it's hilarious. You may find yourself laughing occasionally but it's more out of self preservation than anything actually funny.  The acting in this film, from top to bottom, including Faye Dunaway and Carrie Ann Moss in supporting roles, is just plain awful, which doesn't begin to truly describe it. No, the actors weren't working with a great, or even good, or hell even a passable script here as Jonathan Penner's screenplay was below amateur. It didn't help the actors out with believable lines or the film itself out by not having head scratching moments such as when a dog printed on the wall paper turns toward the camera and howls. That moment was silly in the absolute worst way. This screenplay would have left the finest actors up shit's creek but it made Goddamn fools of this cast. Most of which Cressida Bonas who played Sasha, the female lead and delivered every single line like a shy little child talking to grown ups. The more experienced Douglas Smith and Lucien Laviscount who co-star as best friends living with Sasha are barely better. The overacting is abundant but no scene may have stolen the show, again in the absolute worst way, than Smith's Elliot driving while sniveling and belting some emotional song about love and death and pounding the steering wheel. It's laughable but never funny and finds a way to be even worse when it precedes the most obvious car crash that was telegraphed from a mile away.

The complete and total ineptitude of this film can be summed up by Elliot realizing that "Don't say it, don't think it" isn't just some clever tag line the film's marketing team came up with and decided needed to be scrawled just about everywhere you look in the movie- in drawers, on walls, in books, on windows, and make it's way into every other sentence spoke, but this is actually the way to beat the curse and stay alive! Ding ding ding we have a winner folks! This generically named demon gets his power from the fear when you speak his name. Now I'm sure somewhere, sometime, someone has uttered "bye bye, man" to a friend but that's a plot hole we'll just leave gaping. So problem solved, we don't speak his name and don't think about this demon with an incredibly lazy design or his pet dog with Nintendo 64 graphics that shows up sometimes and only at the end of the movie starts to eat a corpses head, and we're golden right? Well, wrong. It seems after Elliott magically discovers this fucking secret, that isn't a secret at all but a fucking warning from the man decades earlier (holy shit what a fucking revelation we have on our hands, folks!) it seems that "Bye Bye Man" is all he can fucking say. Or Try to say. Or Try not to say. It didn't really make much sense.

The things that did make sense were the little curve balls the film threw at you from the Bye Bye Man's point of view of messing with his victims which may work on these college assholes but anyone with half a brain saw the giant "gasp" moment in the finale coming as they had just used the same little trick and plot device no more than five minutes earlier. Finkle is Einhorn... Einhorn is Finkle!

And there's so many other moments that just don't make fucking sense in one way or another. Either within the story, such as why is the house on fire at the end out of nowhere? Or why did they decide that was a great idea such as the lady cop winking at John and then being completely dumbfounded that he awkwardly winks back. Now this moment has nothing to do in the grand scheme of things but it's one of countless moments that just pile up and up and up. You be asking yourself, but what about the jumps scares? Surely a PG-13 rated supernatural horror film has plenty of jump scares, right? Yes it does and surprise! They're not effective. Hell, they barely have any affect on the characters in the movie let alone the audience. I sure hope Doug Jones did something cool with the money he got from this because he's too good to be wasting his time in bullshit like THE BYE BYE MAN.

Repeat it to yourself: "Don't say it, don't think it" and if you're lucky maybe you'll forget this steaming pile of shit exists.
Posted by Celluloid Terror (Seth Poulin) at 12:16 AM