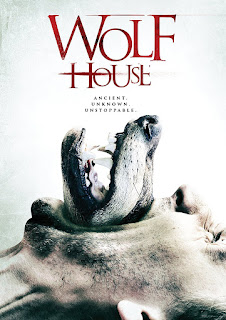 The Film
A group of friends cabin getaway is shaken up when one of them shoots a wild animal they believe is Sasquatch. The group decides to bring the animal home in hopes to discover what it really is and potentially become rich from their finding. Unfortunately an old Native American warning to respect the forest comes true and the wolflike beast wakes up and begins stalking the house while dangerous native spirits haunt the house.

WOLF HOUSE is a found footage film made on a shoestring budget. IMDB reports an estimated budget of $5,000 and that is incredibly low even for the found footage genre. There will be obvious drawbacks with such a tight budget but I think director Matt Lord did create a passable film from that. The film only has two locations, the cabin and its surrounding forest and the house. These locations allow the movie to get by with minimal set design so the movie isn't the most visually striking piece of horror you've seen lately but it gets by.  The cast helps with this as they are competent and while not being Oscar caliber they don't drop the ball and become something you'd see in a Tommy Wiseau film. 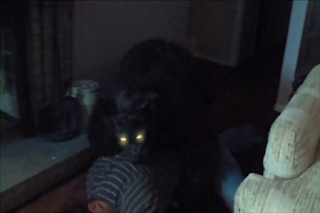 The thing that may really turn viewers off is the wolf creature which is obviously a man in rather cheap suit walking around on all fours. In scenes where it is more exposed it's obviously cheap but they do keep it largely covered for the majority of the movie which helps. The monster could have been done with cheap and gaudy CGI but the filmmakers decided to go the practical route and I respect that. I'm a lover of rubber suit monster flicks and I find this to be in that vein. It doesn't really help it look any better but they went for it and made it work.


WOLF HOUSE isn't a game changer, or even a film I'd call "good" but it was more entertaining than The Bye Bye Man which was a major release horror film and frankly it's probably better made as well.

The Audio & Video
The anamorphic widescreen transfer from Wild Eye Releasing looks as good as you'd expect from such a low budget production these days. HD cameras certainly help and the picture quality here is pretty solid. Colors are natural while black levels are fairly deep and don't suffer much from blocking or compression. The image is clean and pleasing to the eye. The English audio is crisp and clear with a decent mixing job. There's no damage or background noise to speak of. 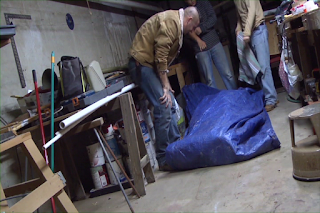 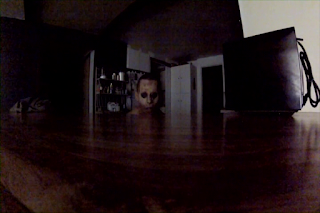 The Bottom Line
I admire what WOLF HOUSE did on a shoe string budget. I have a soft spot for rubber suit monsters and making it work no matter what. The movie leaves a lot to be desired but I did find it to be mildly entertaining.