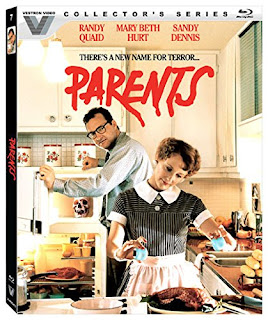 The Film
PARENTS is a film set in the idyllic 1950s, a time straight out of a Norman Rockwell painting and the Laemles want nothing more than to blend in and be that picture perfect family with their ten year old son Michael. Unfortunately Michael isn't the All-American boy but rather a very quiet, distant and frankly somewhat odd child. His father (Randy Quaid) is disapproving of the boy, commonly more concerned about the bottle of wine he chooses for dinner than bonding with his son. Their mother is a typical housewife interested in getting a hot meal on the table for her family and babying her son. Michael usually goes to bed early without eating his meat because he knows there's something wrong with his family... they're cannibals.

Bryan Mardosky plays Michael and at first his performance comes across as wooden, stilted and rather bland. I feel that this is all intentional from director Bob Balaban as he is using Mardosky's performance as Michael to show the effects an abusive and overall poor home life can have on a child. I think Michael has become the shell of a healthy child and is very introverted and keeps mainly to himself. PARENTS shows a very twisted version of that 1950's idealism with a family that feasts on human meat without too much in the way of graphic gore or imagery to really make a horror film. He also fits in some dark comedic moments throughout. Don't get it wrong though, PARENTS is a weird movie that does a damn good job at making the viewer feel uncomfortable and squeamish. This is done with gratuitous and repetitious shots of the food that plays such a big role in the film as many scenes revolve around it. The meat seems to get slimier and more and more undercooked every time we see it. It's disgusting.

The film really succeeds because of Randy Quaid and Mary Beth Hurt's performances as Michael's father and mother. Mary Beth Hurt wants nothing more than to live the American dream with a happy family living in Suburbia but is stuck in between her husband who has made the family a house of cannibals and is an abusive man. Without laying a hand on his son he haunts him and broods over him, sitting in dark rooms or in the shadows waiting for Michael to curiously search around to uncover the truth his family hides. Quaid's performance is THE scariest thing of the film. He makes me extremely uncomfortable and is a perfect metaphor for the mask America put on the 1950s hiding the uglier social issues the country faced with a post-war economic boom, paintings of apple pie and a widespread idea of "The American Dream".

PARENTS is well made and has aged just as well. It is a movie that never quite clicked with me until this viewing but I get it now and I think if you go in expecting a strange horror film that relies more on characters and relationships rather than shocks and gore you'll be pleasantly surprised.

The Audio & Video
Spine #7 in the Vestron Collector's Series looks and sounds quite good. The 16x9 anamorphic widescreen transfer has a nice overall picture quality with strong detail throughout. From the textures in clothing to the nasty, slimy quality to the meat at every meal there is good attention to finer details. Colors are vibrant and natural. There are small sections of the film that have a softer look than the rest of the film but these are vastly in the minority of scenes. The audio is handled with a DTS-HD Master Audio 2.0 stereo mix that sounds excellent. It's a crisp and clear mix with stable levels and a quality mix. There's no damage or background noise. Optional English SDH subtitles are included.

The Bottom Line
PARENTS is a film that has aged extremely well and is deserving of this stellar release from Vestron. I consider this the definitive edition of a film that deserves to be re-discovered in HD.