THE LAIR OF THE WHITE WORM (Blu-ray Review) - Vestron Video 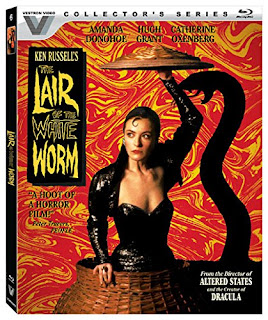 The Film
When Archaeologist Angus Flint (Peter Capaldi) unearths a strange serpent-like skull while excavating the site of an old convent on the grounds of a bed and breakfast he quickly learns of the tale of the D'Ampton Worm, a mythical snake-god from said to have been slain a thousand years earlier by John D'Ampton, the ancestor of current land owner James D'Ampton (Hugh Grant). The old tale seems to come true when a couple of women go missing and the group discovers that a local woman named Lady Sylvia Marsh is in fact an ancient priestess to the snake-god.

THE LAIR OF THE WHITE WORM is loosely adapted from the Bram Stoker novel but Ken Russell has greatly changed most of the story and details making for a wildly entertaining, purposely campy mashup of horror, fantasy and comedy. Hugh Grant is quite good as James D'Ampton and he has good chemistry with Peter Capaldi as an odd couple type pair who go about investigating the legend in different ways. Amanda Donohoe is captivating as Lady Sylvia Marsh, giving a sexy and domineering performance of pure evil. From seducing a Boy Scout to turning townspeople in to vampires with a single bite, she is a leather clad vixen that owns her sexuality and strength and the film is better off for having her in it.

Arguably the film's most interesting scenes are after those snake bites from Marsh when they lead to these trippy LSD induced visions of the snake demons, orgies, medieval battles and more bizarre scenes. This is purely Ken Russell being the brilliant director he's been known to be. The hallucinations wouldn't have felt out of place in his masterpiece from 1971 The Devils. Russell seamlessly mixes these elements of horror with very organic and natural comedic moments that never feel out of place and wrap the entire film up in a fantasy film shell. These ingredients make for such a wildly entertaining hour and a half filled with interesting and lovable characters, a giant B-movie monster, and a strong sense of aesthetic. Russell's eye for detail in sets, costumes and props is on full display from the blue body paint serpent scene, to the Victorian mansions decorated floor to ceiling with all sorts of gaudy yet elegant dressing and even massive underground snake/dragon monster look appealing to the eye and not at all corny.

THE LAIR OF THE WHITE WORM would have benefitted from a slightly larger budget as it would have allowed the film to have a more expansive feeling and allowed for more special effects but THE LAIR OF THE WHITE WORM is a charming, funny and well made fantasy horror film based in folklore. It has held up to multiple viewings over the years and will remain in rotation for years to come.

The Audio & Video
Vestron Video gives a beautiful HD presentation to this new Blu-ray of THE LAIR OF THE WHITE WORM. The anarmophic widescreen (1.78:1) transfer looks gorgeous. There is a very tiny bit of speckling otherwise the picture is quite clean and sharp. Colors are beautiful and shine while black levels are handled nicely. Detail levels are strong with surfaces and textures and skin tones are healthy and handled naturally. The DTS-HD Master Audio 2.0 stereo mix takes the film's original  audio mix and makes it sound pristine. The track is crisp and has crystal clarity. There's no damage, imperfections or background noise. Levels are mixed nicely so that dialogue and music are complimentary.

The Bottom Line
THE LAIR OF THE WHITE WORM is an overlooked and underrated piece of 80s horror. I hope this Blu-ray allows the film to be rediscovered and gives this great piece of work from Ken Russell the credit it deserves.

THE LAIR OF THE WHITE WORM is available HERE
Posted by Celluloid Terror (Seth Poulin) at 2:55 PM