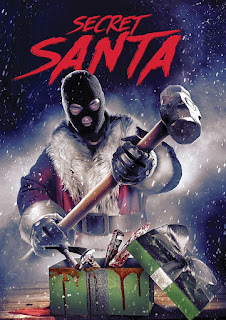 The Film
A house of college students get together for a Christmas party where Olivia plans to introduce them to her new boyfriend, their Professor Ramsey. Hoping to break the awkward tension they hand out their secret Santa gifts but everyone finds their gift replaced by an object that the masked intruder stalking their party plans to kill each of them with. SECRET SANTA is giving the gift of death and the co-eds must fight for their survival.

SECRET SANTA is a throwback to holiday slashers of the 70s and 80s and it's obvious that writer/director Mike McMurran loves the genre. When he's keeping things straight forward he has an interesting group of characters from the goofy funny guy, to the sexy girl creating trouble with the guy she likes that's already taken, and everything in between, this house of students is generally pretty likable and diverse. The kills are well done and at times pretty gory creating the memorable moments that slasher fans latch on to. The thumping synth score drives the violence and tension and McMurran creates a really well done slasher film. 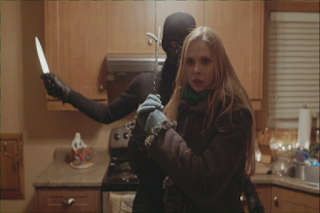 Unfortunately all too often SECRET SANTA is handled as a spoof on the genre and gets unnecessarily goofy and intentionally cheesy. One of the gifted weapons is a hair dryer and the murder scene with that weapon starts out with a moment looking for a big laugh and I don't think this movie really needs those moments. There's enough lighthearted comedic moments with the Dwayne character and a few moments scattered throughout that I don't think they needed to spill the comedy over into the killer and the kill sequences.

That doesn't stop SECRET SANTA from being an entertaining and well acted film. The core group are all solid in their roles from the goofy Dwayne (Geoff Almond) to Annette Wozniak who plays Nicole and is a worthy final girl type character. The cast is a strong point. The killer's motive reveal is a mixed bag however as I think the scene plays out well but the motive feels like they pulled it out of a hat filled with various motives. 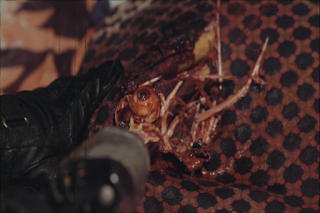 SECRET SANTA is a holiday slasher that takes a step back for each step forward. I think there's a great slasher hidden in there but you have to wade through some spoofy moments that frankly aren't needed and kill the mood. I do enjoy the movie and think Mike McMurran is really capable of creating a top notch slasher film and look forward to seeing what he does next. Until then SECRET SANTA is worth adding to your Christmas horror collection.

The Audio & Video
SECRET SANTA has an intentional imitation aged style and look with fake grain and damage to give it the throwback look of drive-in horror films from decades past. WILD EYE RELEASING has given us a DVD that faithfully maintains that style but also manages to keep the film looking sharp and pleasing to the eye. Colors are natural and don't look artificially altered. Detail is decent and black levels are handled well with no artifacting. The 2.0 English audio sounds good with no background noise or distortions. The mix is good but the score could have been pumped up a tad to really let it come through and shine because it is excellent. 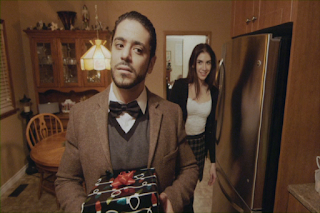 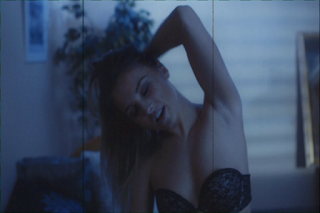 The Bottom Line
SECRET SANTA is flawed and would have benefited from a more straight forward approach but it remains an entertaining holiday slasher that slasher buffs will surely be adding to their Christmas horror rotation.

SECRET SANTA is available HERE
Posted by Celluloid Terror (Seth Poulin) at 10:34 AM