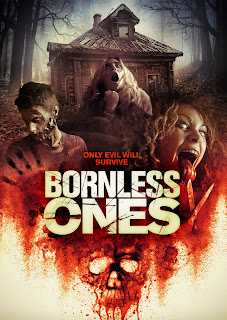 Emily is moving into a new home with the help of her friends so that she can better take care of her brother Zach who has Cerebral Palsy and is paralyzed. Shortly after arriving the group begins to find out the evil secrets the house holds and it begins to take hold of them one by one.

BORNLESS ONES is a straight forward demonic possession style horror film that had potential to be pretty good but it falls in to too many cliches of the genre and there are a few too many moments where everything is so over lit that I was wondering if there was anyone looking through the lens of the camera while filming. The cast is good, it's unfortunate that there's a lot of all too typical pitch-shift demon voices that I would have liked to see the actors emote their demonic possessions instead of relying on the voice change. The cast is likable with good comedic timing when it's asked for and I think the acting is the high point of the film. 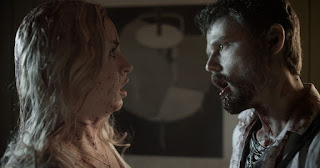 The script by writer/director Alexander Babaev is a mixed bag. There are some interesting ideas I thought were really different and something I don't think I've seen before but there's also way too much reliance on poorly rendered CGI (but hey, it was better than The Bye Bye Man!) scares and stabbing scenes. It may sound like an odd complaint but there's so much stabbing at the end that everyone gets stabbed repeatedly. It does make for a bloody violent finale but good lord there could have been something else tossed in. The CGI scenes were a poor decision as far as I'm concerned, similar scares could have been achieved with less flashy but more atmospheric and simply better looking practical effects. 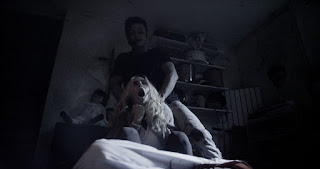