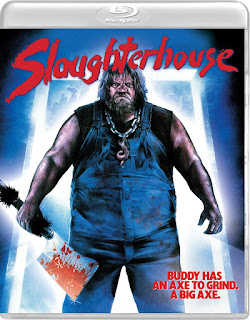 The Film
Lester Bacon is in financial trouble and has been confronted by the town's lawyer, the sheriff and a rival slaughterhouse who wants to purchase his land and facility. Lester is fed up with the threats of being shut down and evicted he unleashes his oversized and mentally underdeveloped son Buddy on anyone that might be against them.

SLAUGHTERHOUSE is a video store staple of the 1980s where it found the majority of its audience after a brief theatrical tour. This slasher film is far from original but that doesn't stop it from being one of the better slasher film's from the later part of the decade that thrived on this type of film. Drawing obvious influence from The Texas Chainsaw Massacre, SLAUGHTERHOUSE is a dirty, sweaty horror film with a massive 350+ pound madman squealing like the swine he loves so dearly. Yes, Buddy's lone form of communication of to squeal and grunt like a pig and it makes him an instant classic slasher antagonist. Joe Barton really portrays Buddy perfectly. 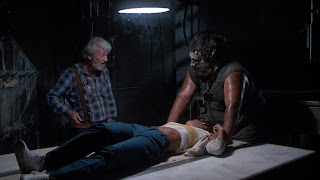 Director Rick Roessler made great use of the locations at his disposal with a dry, dusty produce plant and old equipment boneyard serving as the exteriors for the slaughterhouse and they make the film look like a million bucks (which was more than SLAUGHTERHOUSE cost to make.) The sprawling maze like interior freezers, grinders and meathook lined storage rooms give an overbearing sense of misdirection and confusion with potential death waiting around each and every turn. The film is violent and gory, with limbs getting lopped off, heads being crushed and bodies being thrown into the grinder but it also has a sense of humor which keep things a bit airier and fun which allow for frequent repeat viewings to remain entertaining and never too heavy. 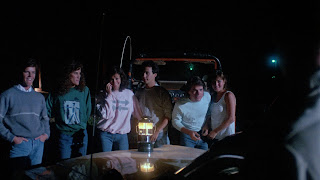 It may never be considered one of the best slashers and sadly it didn't spawn any sequels because I think there was potential to continue the Bacon and Sons story, but SLAUGHTERHOUSE is highly entertaining and a really solid production. Roessler's script and direction give us just about everything we expect from a "slice and dice" picture and the cast does a really good job top to bottom as they fight through rain, mud, and cold corridors of the slaughterhouse. This is one of the higher quality slasher films to come out in the later part of the decade.

The Audio & Video
SLAUGHTERHOUSE has had a number of home video releases since being released in 1987, ranging from VHS to a rather shoddy DVD in 1999. For years it was simply an unattractive film to watch but the film gained a fanbase nevertheless. In early 2015 it received a Blu-ray release in the UK which was a bit of a revelation for the film. For nearly two years that was the best way to see it but Vinegar Syndrome has done what Vinegar Syndrome does by releasing an even better version with a brand new 2K scan and restoration from the 35mm interpositive. Colors have never looked this vivid and detail has never been this crisp. There's a healthy grain structure and the overall sharpness and clarity is a noticeable improvement over the previous Blu-ray released in England. The DTS-HDMA 5.1 audio mix is fantastic. A strong audio presentation that remains clear and free of distortions. Sound effects and dialogue play perfectly with the score and Buddy's guttural swine screams have never sounded more disturbing. 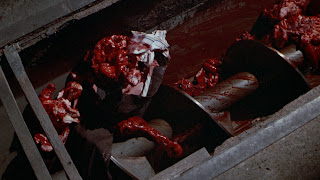 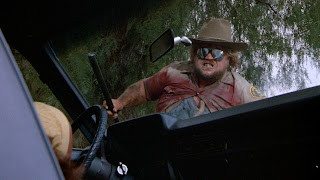