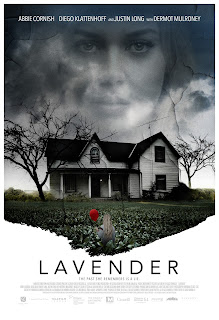 LAVENDER stars Abbie Cornish as Jane, a wife and mother who is suffering from Amnesia after a car accident. While her memory returns she begins to have memories of a family she didn't know she had and visions of the murder of that family that she may have committed.

LAVENDER is a slow burn psychological and somewhat supernatural thriller centered around Jane along with her daughter and her strained relationship with her husband. She has minor flashes of memories from a life she doesn't know and has memory loss when it comes to small things like appointments. She photographs abandoned houses for her art gallery, fascinated by the life that once thrived within the walls of the now derelict buildings. After her accident she finds out a bit about her past and that she owns a house she has been photographing and that it's been kept up by her uncle. Upon returning to this house strange things start happening to Jane and her daughter until the haunting and sickening truth of her past comes boiling to the surface.

The pacing of LAVENDER could have been a problem but it ends up being one of the film's greatest strengths if you can get beyond the first 25 or 30 minutes. After that the film keeps growing into something more interesting but sadly it never gets to anything interesting enough. The film is predictable and dull with Abbie Cornish sleepwalking her way through the film. The film doesn't know if it wants to take a psychological thriller approach or if it would rather be some sort of supernatural ghost film as it fails at doing both. LAVENDER could be worse but it could have been a lot more interesting with a more focused approach.

Posted by Celluloid Terror (Seth Poulin) at 11:53 AM