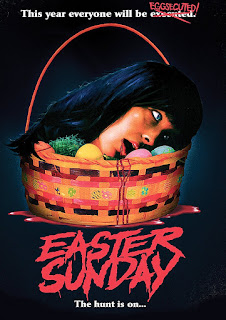 The Film
I don't get the trend of making intentionally bad and/or stupid horror films. Plenty of B-movies of days past were entertainingly bad but very few were made to be shitty on purpose. The filmmakers set out to make a movie the best they could and for any number of reasons it turned out to be shit. Most of the time those movies were nothing more than shit but sometimes something struck a chord with audiences and a movie was beloved for all the wrong reasons. Now it has become a trend to make throwback style horror and exploitation pictures and make them stupid and shitty on purpose and it needs to stop. EASTER SUNDAY falls into this category.

Let it be known that I have no problems with intentional campiness in a movie, not everything needs to be high art, but there is big difference between campy and purposely stupid. EASTER SUNDAY is a slasher movie that tries to replicate the genre's golden years of the 1980s with it's plot, score and overall aesthetic and it could have been a successful and memorable slasher film for this era if it had taken itself just the least bit serious. Instead,  the writing and casting seem like they were too concerned with writing the next dumb line of dialogue that isn't funny or trying out another stupid voice to overdub a character with. Had this movie put a bit of effort into getting any sort of actual performance from their cast and written even a mildly competent script EASTER SUNDAY would be a fun little body count film as it does have a simple yet effectively designed killer. Unfortunately he has an obnoxious voice that sounds like it came from a wise guy cartoon character designed to get on your last nerve. Every line delivered by the killer sounds like it's meant to be a punchline to a joke that was never set up and doesn't make any sense. 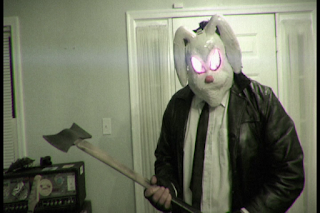 I wanted to like EASTER SUNDAY and there are things about it that I did enjoy such as the fun it has with it's special effects and gore even if they're on the cheap side like spaghetti guts, it made me smile. Robert Z'Dar is a welcomed addition as the cop and there's a couple of genuinely funny lines dealing with his character. The heart of an entertaining and solid slasher are all there but I think EASTER SUNDAY took a wrong turn early on in deciding what they wanted the movie to be and there's no recovering from making a movie intentionally bad.

The Audio & Video
Camp Motion Pictures' DVD of EASTER SUNDAY features a 1.78:1 anamorphic widescreen transfer that has an artificial filter over the picture to make it look like an aged and slightly worn print from the 80s. This gives the film a greenish blue tint with faux speckling and grain throughout. The picture quality is still good overall with fine amounts of detail and colors poking through. The audio sounds fine and is right in line with the picture quality. The score by Dave Ferguson, which is probably my favorite part of the entire movie, sounds crisp and shines through. Levels are steady and mixed well. 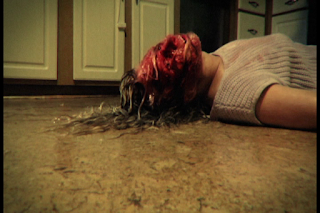 The Extras
A mini behind the scenes documentary is included along with a trailer. 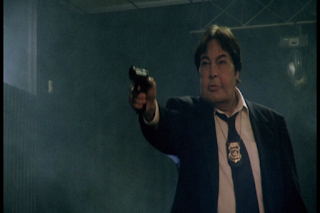 The Bottom Line
I'm not a fan of the style and vibe this movie went for but if you're more forgiving with intentionally bad movies then you may enjoy it more than I did.