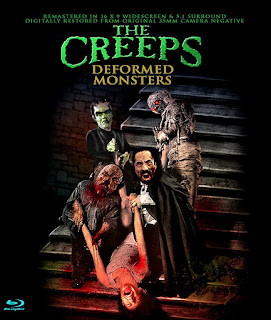 The Film
A nervous but altogether mad scientist has been stealing original manuscripts of some of the world's most notorious horror fiction including Bram Stoker's Dracula and Mary Shelley's Frankenstein in order to bring these legendary characters to life to gain power. He successfully summons Dracula, Frankenstein, The Wolf Man and The Mummy, the only problem is that he made an error in the process and each of the monsters is a mini three feet tall. Now he needs a virgin to gain full control over the monsters and bring them to their full size and power.

THE CREEPS is an oddball black comedy horror film from director Charles Band. The film is very subdued in its violence with even the worst scene that involves a woman strapped naked to a table and subjected to an experiment that lands her in another dimension being notably light and almost breezy, never feeling mean or exploitative at all. The tone of the film holds it back from being a more successful and entertaining picture than if it went for a more horrific angle. I never felt that the monsters, who have a nicely designed classic look led by Phil Fondacaro as Dracula, were a true threat and the film does little to ever change that with the monsters pulling off more hijinx than scares.

Laughs are held in higher regard in THE CREEPS with Bill Moynihan starring as the stuttering, nervous and inept mad scientist being written solely for comedy or at least that is how it seems. Rhonda Griffin and Justin Lauer star as the main protagonists, a librarian trying to track down her stolen books and the private detective she hired from the back of a video store and they have a good chemistry on screen. The acting is all very hammy though but it fits the campy nature of the picture. When the dust settles I really wish THE CREEPS would have had some darker and more intense moments to really break up the monotony and one note tone of the film. It's not bad but it isn't among Full Moon's best output.

The Audio & Video
Full Moon has restored their film from the original 35mm camera negative for its high definition debut and it's never looked better. The overall image has a decent sharpness that leads to good detail levels. The film as a whole is a bit on the darker side in terms of lighting and there are some softer shots but overall the film looks nice and is a noticeable upgrade. The audio is crisp and without distortion or damage. Stereo 2.0 and 5.1 surround audio options are available.

The Extras
Special features include the original Videozone behind the scenes featurette from 1997 and a selection of trailers.

The Bottom Line
This new Blu-ray release is a nice visual upgrade over previously available editions but this isn't among the classic Full Moon titles.

THE CREEPS is available HERE
Posted by Celluloid Terror (Seth Poulin) at 4:17 PM