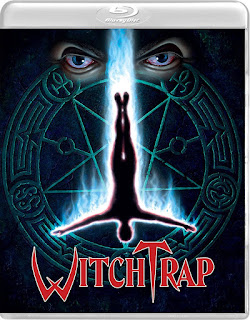 The Film
Fresh of the heels of his 1988 cult classic Night Of The Demons, Kevin Tenney was approached by producers who had funding ready to go and wanted a movie to invest in immediately. Within a week Tenney had the screenplay for WITCHTRAP ready to go and that is the screenplay about a group of paranormal experts and a couple cops who attempt to remove the benevolent spirits from Lauder House which has a history of unexplained violent deaths.

It's quite obvious off the bat that WITCHTRAP had a rushed script because the dialogue isn't very good at all but sometimes we get some really cheesy gold out of it, mainly from James Quinn who stars as Detective Vicente. There's few things to match the greatness of dialogue exchanges such as:
-"I resent that."
-"I resent your mother for taking drugs while she was pregnant."

-"Listen, I didn't miss anything."
-"Yeah, except the last stage of evolution."

That's gold, folks. And Adding to the campiness of the dialogue is the fact that the entire movie had to have its sound and dialogue added in post thanks to a total fuck up by the sound engineer on set. 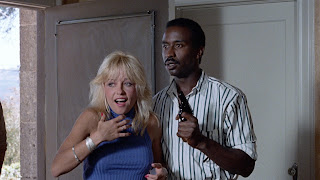 It wouldn't be fair to WITCHTRAP to solely lump it in with other so-bad-it's-good movies, which it could certainly be classified as but it has an undeniable gothic moodiness to it and a surprisingly mean spirit (no pun intended) to it. Look no further than the groundskeeper's death scene to see what I mean - down right cold blooded. Along with the mood is a very cool way of showing the malevolent spirit only through camera lenses for the early part of the film which adds a spooky element that only the audience is privy too leaving the characters in the dark and knowing he could be lurking anywhere at any moment.

WITCHTRAP doesn't forget its 80s roots and provides quite a few gory moments from a memorable shower scene not just for the violent death but for some quality nudity as well along with a head explosion that rivals Scanners. The gore and violence is shown in amounts never before seen here as the film was subjected to several cuts by the MPAA upon its original release and Kevin Tenney has given us the true version never before available. 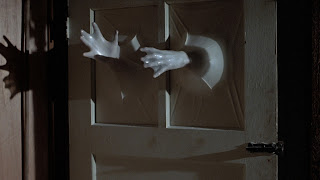 WITCHTRAP is definitely campy and cheesy and very much a film of the 1980s, more specifically a rushed film of the 1980s but there's also really solid production values that make the film feel completely legitimate and more expensive than it was. It has a silly sense of humor along with a great mood and some serious creepy and violent moments.

The Audio & Video
Vinegar Syndrome presents WITCHTRAP with a new 2K scan and restoration from the the 35mm Interpositive and frankly it looks fantastic. There's a thin but natural looking grain structure over the film maintaining an organic film look and feel. Colors are reproduced beautifully from the plentiful deep blood reds to the moody and overcast grays. Black levels are deep while skin tones are lively and healthy looking with no signs of DNR. The DTS-HDMA 2.0 audio mix comes through crisp and clear with perfectly mixed levels. There's no hiss or distortions and no background noise. The mix is simplistic but is of a very high quality and perfectly works for the film in it's original form. 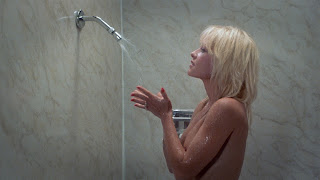 The Extras
This Blu-ray is absolutely stacked with special features including: 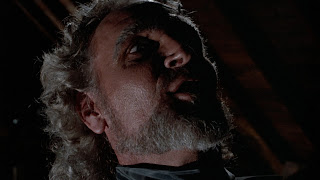 The Bottom Line
You may have seen WITCHTRAP before but you haven't seen it like this. Between presenting the film uncut for the first time anywhere, the gorgeous transfer and the overflowing bounty of special features it is easy for me to say that Vinegar Syndrome's Blu-ray of WITCHTRAP is the definitive release of the film. Highly recommended!