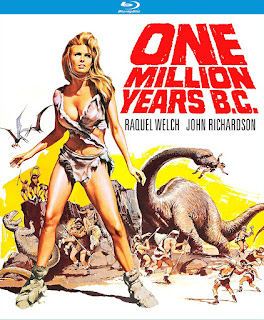 The Film
A look at the tough and rugged life early humans had to live all while being hunted by massive man eating lizards, dinosaurs and bugs. ONE MILLION YEARS B.C. isn't historically accurate by any means but it is far more entertaining than a day spent in class.

It was ONE MILLION YEARS B.C. that broke out Raquel Welch as an international star and sex symbol. The film's main selling point is 100 minutes of the stunning Welch trouncing around in a fur bikini getting into all sorts of trouble. The film is mostly family friendly, with only a few moments that could be considered excessively violent, even for 1966. And even those moments fall short of some of the violence we saw from earlier Hammer productions but still nine minutes were trimmed from the US cut of the film. However Welch still brought a strong sex appeal and as we all know, sex sells and we all bought in.

Welch's sexiness wasn't all the film has to offer, not by a long stretch. The most obvious draw to the film, especially at the time of release was the special effects and creatures created by Ray Harryhausen which include classic scenes with a Pteranodon and Welch along with a epic fight scenes between the tribesman and an Allosaurus that gets a bit bloody. Alongside those classic scenes are giant Iguanas, Tarantulas, various other dinosaurs, ape men and more. Harryhausen's use of stop motion animation here is as good as it ever would be giving full life to each and every creature he designed. The sculpts have an exceptional lifelike quality and make for an exciting and believable cast of creatures and enemies. Director Don Chaffey was plenty experienced by the time he made ONE MILLION YEARS B.C. and was no stranger to fantasy adventure epics having previously directed Jason And The Argonauts, another Harryhausen special effects epic. He would go on to make a couple more films in the genre with 1967's The Viking Queen and 1970's Creatures The World Forgot, both Hammer productions. He proved more than capable of steering the production toward a glorious and successful finish with great set pieces and action scenes.

ONE MILLION YEARS B.C. may be light on plot, existing largely to show off a scantily clad Raquel Welch and yet another highlight reel of glorious Ray Harryhausen creatures, but it does manage to fulfill the promise that the opening narration tells us of the world being unfriendly and inhospitable and though there's no dialogue besides some grunting and a couple of names there's definitely and undeniable character development and meaningful relationships forged and broken during the course of the film. Brian Clemens' screenplay is breezy, quickly paced and filled with deadly encounter after deadly encounter but he proves you don't need page after page of talky characters spewing endless dialogue to have a film that can draw you in to it's characters and the story. At least not when there is Raquel Welch and Harryhausen monsters.

The Audio & Video
Kino Lorber has given a brand new 4K restoration to the film and it looks absolutely stunning. I don't think the prehistoric ages have ever looked this good! Colors are vivid and eye catching with bright blues and fleshy, natural skin tones. Detail is incredible from the fur and leather outfits to being able to separate individual grains of sand. The film has a healthy grain structure maintaining its original film look and feel and I couldn't be happier. The DTSHD audio is an audible winner as well. Crisp and pleasing to the ear, the sound features a perfect mix in levels, no distortions or damage of any kind and no background noise. I think it is safe to say ONE MILLION YEARS B.C. hasn't looked or sounded this good since its original theatrical run.

The Bottom Line
ONE MILLION YEARS B.C. is pure adventure fun and it has never looked better! This is one you can (and will want to) watch over and over! You can count this Hammer fanboy as very satisfied.