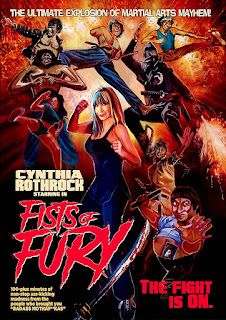 The Film
FISTS OF FURY is a trailer compilation of some classic and not-so-classic Kung-Fu films from the 70s and 80s hosted by martial arts expert and film star Cynthia Rothrock. Rothrock not only gives lead ins to each section of the film such as Femme Fatales and Brucesploitation but she sheds a little light on martial arts films and gives us a little bit of action from would be attackers as well. There's not much else to say, Rothrock's scenes are all filmed in a gym and they're campy as hell but they're entertaining fare to help break up the trailers a bit. The trailers are the main attraction however and act as a damn good checklist of some lesser known Kung-Fu from the golden era of the genre. 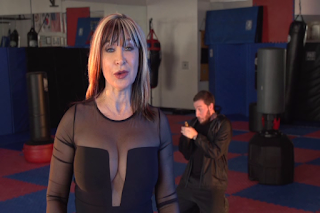 The Audio & Video
The scenes with Cynthia Rothrock that were produced for this release look great. They're sharp and clear. Full Moon didn't restore the trailers used for FISTS OF FURY so naturally this compilation of trailers runs the gamut from great condition to pretty rough and filled with scratches and other damage. I find the damage in some of the trailers to be part of the charm and they're all quite enjoyable. The 2.0 audio matches the video, with crisp audio for Rothrock's scenes and more of a mixed bag for the trailers. Overall a very pleasing release. 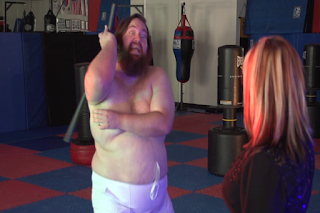 The Extras
A short behind the scenes making of featurette and an interview with Cynthia Rothrock are included.

The Bottom Line
Kung-Fu is cool and it's about damn time more people get on board with the genre. FISTS OF FURY is something you can sit and enjoy while taking note of the films you still need to track down and see or something to put on in the background of a party.