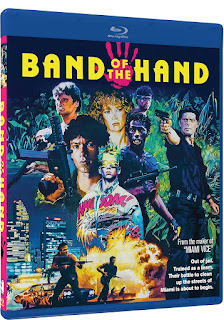 The Film
A group of five teens who are among the worst juvenile delinquents in the system are due to be processed as adults if they don't participate in a rehabilitation/survivalist program led by a Native American Vietnam War veteran named Tiger Joe (Stephen Lang) in the Florida Everglades. The group must learn teamwork, loyalty, trust and togetherness to survive their trials. Upon completion the group is awarded with a home in a violent Miami neighborhood to rebuild and start a new life. However the house is used as a drug den and a prostitute hideout by the local gang leader Cream (Laurence Fishburne). The group must fight for their new home and for each other in a violent and over the top series of fistfights, shootouts and explosive encounters with the drug pushers.

BAND OF THE HAND didn't start out quite as I anticipated. I expected a more straight forward action exploitation film but the time dedicated to developing the teen characters and their relationships with Tiger Joe really paid off and make BAND OF THE HAND a better overall film that really engages the viewer and gives them a reason to really care about these reformed troubled youths. I expected a lot of shoot outs and fights, which there are plenty of but the excitement early on is more of an adventure film with quicksand, deadly snakes and wild boars attacking the group as they learn teamwork and loyalty.

Producer Michael Mann has made some classic action and thriller films such as Heat and Manhunter and undoubtedly had a hand in helping director Paul Michael Glaser make not only an exciting film but one that is also a really solid production. The acting is good, including James Remar who made his name as Ajax in The Warriors several years earlier and Michael Carmine who unfortunately only made a handful of other appearances in films and television. The young Laurence Fishburne is also notable for his time on screen as Cream the head of the local drug game. He shows the talent that would make him the Hollywood staple he has since become.

BAND OF THE HAND eventually becomes the action film it promises to be as the third act is nearly one long action sequence that gets bigger and bigger and in true 80s fashion does become a bit campy and over the top but never to the point where the film falls off and loses you. It pulls the theme together and makes BAND OF THE HAND a piece of 80s brotherhood action that deserves to be seen. If there's a subgenre called "Protect-Your-'Hoodsploitation" BAND OF THE HAND will fit right in and if there's not there should be.

The Audio & Video
Mill Creek gives BAND OF THE HAND it's first proper home video release after a cropped full screen DVD and a MOD DVD-r we finally have an anamorphic widescreen, factory pressed release and in HD no less. The 1.78:1 anamorphic transfer looks sharp with good detail level and vibrant colors. Skin tones look healthy and natural while black levels are handled well and are pretty deep. The audio is handled with a Dolby Digital mix that is crisp and well balanced. There's virtually no issues with any sort of damage or distortions. I'm very pleased with how this disc turned out.

The Bottom Line
BAND OF THE HAND is a mashup of the best 80s action and revenge tropes blended together for a movie ripe for rediscovery. Mill Creek's release is sadly void of any special features but the quality A/V work is enough to warrant a recommendation especially at its bargain bin price point.

BAND OF THE HAND is available HERE
Posted by Celluloid Terror (Seth Poulin) at 12:42 PM