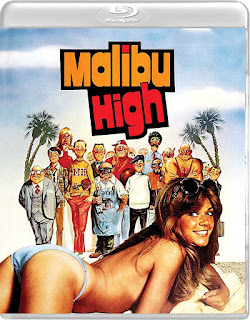 The Film
MALIBU HIGH is a film with a misleading title and poster. One look at the poster makes you imagine a lighthearted, sex comedy with an attractive lead and a colorful cast of supporting characters romping around classrooms and the beach. It was a decision producer Lawrence Foldes made strategically and purposefully. It paid off as MALIBU HIGH was quite the financial success but it did not represent the movie audiences would see in any way, shape or form.

The alternate working titles, High School Hit Girl, Lovely But Deadly and Death In Denim all paint a much more accurate picture of what is in store when watching MALIBU HIGH. Jill Lansing stars in her only film appearance as Kim, a teen with an attitude who has been dumped by her boyfriend for the local rich girl. With slumping grades and the proposition of not graduating looming over her head she takes it upon herself to sleep with all of her teachers and blackmail them into straight A's. And while she's at it she decides to make some money along with those better grades so she hooks up with the local small time drug pushing pimp Tony (Alex Mann). He mistreats her and she splits to work with Lance (Garth Pillsbury) who offers a more professional, high profile lifestyle for Kim while she's turning tricks but quickly gets Kim involved in much more violent and deadly crimes spiraling the high school senior's life out of control.

MALIBU HIGH is a bit rough around the edges giving the movie a proper exploitation attitude. Jill Lansing's performance is raw and believable and she has a natural screen presence on top of her natural sex appeal. It's a shame that her experience making MALIBU HIGH was apparently not one she enjoyed as she would never make another film despite being good enough to have continued in the field. Alex Mann and Garth Pillsbury add a bit of veteran experience as the feuding crime bosses. Their styles and characters are totally different but each played brilliantly with Mann portraying Tony's low rent operation that for the blue collar workers around town while Lance gives a more luxurious experience to wealthier clients from the city in true mob boss form.

Ironically it would be Lance that ultimately destroyed Kim's life by persuading her into taking a gun along on various jobs to knock off the client and Kim is quite good at it and takes it upon herself to get a bit of revenge on her rival from school. This descent is fascinating and endlessly entertaining to watch. The movie would be fun just having Kim fuck her teachers and blackmailing them for grades but you add in a mob boss, murder, drug addiction and an icepick to the back in what may be my favorite scene of the film, you get a shining example of exploitation.

The Audio & Video
Vinegar Syndrome has given MALIBU HIGH a new HD transfer and 2K restoration from the original 35mm camera negative leading to a warm picture with a healthy grain structure. Colors and skin tones have a natural look with no waxiness or DNR. A DTS-HD Mono audio track handles the audio perfectly with a crisp and clear sounding mix that is free of background noise, or any damage like hissing or popping. I wonder if I'll ever get tired of saying Vinegar Syndrome did a stellar job on a release? I highly doubt it.

The Extras
A bountiful selection of special features are included on the disc to round out a great presentation of a fine film, starting off with an audio commentary track with producer Lawrence Foldes and actress Tammy Taylor. Then a trio of video interviews with Lawrence Foldes, Tammy Taylor and co-star Garth Pillsbury and footage from a Q&A at a screening of the film at the New Beverly Cinema with Lawrence Foldes, Tammy Taylor and Alex Mann round out the main extras for the film before we can give in a pair of short films from Lawrence Foldes titled "Struggle For Israel" (1976) and "Grandpa And Marika" (1975). Rounding out the features are the original theatrical trailer, a promo still gallery and reversible cover art.

The Bottom Line
MALIBU HIGH has everything an exploitation film fan could want all wrapped up in a beautiful Blu-ray package. I highly recommend you get off your ass and pick up this treasure of sleaze.