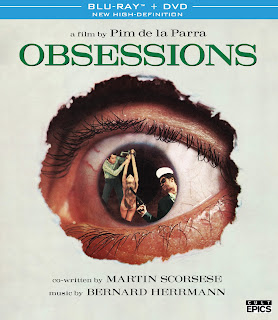 HITCHCOCK, SCORSESE & SEX. MADE IN HOLLAND.
“OBSESSIONS” PREMIERES ON BLU-RAY/DVD COMBO ON MAY 9, 2016

Los Angeles, CA (May, 2017.) Synopsis:
The obscure film OBSESSIONS (aka HOLE IN THE WALL) was directed by Dutch artsploitation auteur Pim de la Parra and co-produced by longtime collaborator Wim Verstappen (BLUE MOVIE). This gritty, psychedelic Hitchcockian mystery, which is notable for being the first Dutch film shot in English-language, starts in a savagely brutal fashion. When a bloody painting of Vincent van Gogh falls from a wall and exposes a makeshift peephole, student protagonist Nils Janssen (played by the film’s German co-producer Dieter Geissler) becomes an unwitting witness to a gruesome sex crime next door.  When his young fiancée Marina (Alexandra Stewart of Truffaut’s DAY FOR NIGHT), an enterprising journalist, tells him about a report of a murder that she is writing, he naturally wonders if it’s the very same killing.

This classic exploitation film was the birth of auteur cinema in Holland, and inspired legendary filmmakers such as Paul Verhoeven to make their start in the industry.  Originally distributed in over 100 countries, the film remained unreleased in the U. S. (and France) – until now.  Perhaps most notably, the film was co-written by a young Martin Scorsese, who shot the legendary erotic dream sequence for his first feature WHO’S THAT KNOCKING AT MY DOOR (1968) in Amsterdam, that same year.  Additionally, the film also stars legendary Dutch filmmaker Fons Rademakers (MIRA, THE ASSAULT), is edited by Henry Rust (CHILDREN OF PARADISE) and scored by Hitchcock composer Bernard Herrmann (TAXI DRIVER, SISTERS). OBSESSIONS is a curious cultural hybrid where late-1960s Dutch exploitation and classic Hollywood Hitchcock collide in a provocative and revolutionary fashion.