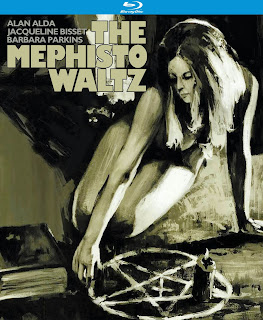 It is not surprising that in the years directly following the success of Rosemary's Baby Satanic horror and thrillers were incredibly popular. Fred Mustard Stewart wrote the 1969 novel The Mephisto Waltz which would be adapted as a feature film by producer Quinn Martin who is better known for producing television series in the 60s and 70s such as Twelve O' Clock High and Barnaby Jones. THE MEPHISTO WALTZ would be Quinn Martin's only theatrical production and while it was not a large financial success it is a successfully tense occult thriller.

Alan Alda Stars as Myles Clarkson, a music journalist who studied piano at the Julliard Academy years ago. Myles lands an interview with Duncan Ely, an elderly piano virtuoso who takes note of Myle's hands, comparing them to Rachmaninov's and calls them perfect for the piano. Ely and his daughter Roxanne (Barbara Perkins) quickly form a strong friendship with Myles and his wife Paula (Jacqueline Bisset), who is very suspicious of the new found attention. Myles and Paula are unaware that Ely and his daughter are Satanists and have performed a ritual transferring Ely's soul into Myles' physical body. Shortly after Ely passes away and leaves one of his pianos and a large sum of money to Myles in the hopes that he will put it towards continuing his piano playing. Myles has a new attitude and a bit of arrogance along with taking over Ely's concerts which Paula initially enjoys before a series of bizarrely hallucinogenic dreams scare her after she sees her young daughter Abby being killed as a part of a Satanic pact. This begins an ongoing descent into Satanic pacts and the occult.

THE MEPHISTO WALTZ is the epitome of a slow burn horror film. There's little in the way of visual thrills for much of the first 90 minutes of the film but the Jerry Goldsmith score, taking cues and pieces from Franz Liszt mixed with electronic sounds and tones and disturbing strings, the sense of dread is heavy and foreboding. I am certain that the film would not be a success without Goldsmith's score. It drives the film and creates the atmosphere that feels like a nightmare that will have you wiping the sweat from your brow. Director Paul Wendkos uses stylistic choices in the photography and camera lenses to express the otherworldly magic of the soul transference without any special effects, keeping the film minimalistic and based solely around it's atmosphere.

The slow burn nature seduces the viewer in much as it does to the character Paula who inevitably gives in to the seductive nature of the power a deal with the devil holds regardless of the consequences. THE MEPHISTO WALTZ gets better as it goes along, offering plenty enough pay off for the patience of the viewer. Film Historian Bill Cooke discusses a number of cut scenes from the film that would have offered a more straight forward experience however they would have added significant run time that the film doesn't need and I don't think could handle. There is a bit of trade off however as I think the film is a bit choppy from scene to scene and doesn't always flow smoothly. THE MEPHISTO WALTZ remains an effectively eerie work of Satanic horror.

Kino Lorber has released THE MEPHISTO WALTZ on Blu-ray with a full HD 1080p 1.85:1 anamorphic widescreen transfer marking the film's high definition debut on home video. The film's transfer is grainy, at times excessively so which leads to a softer than optimal image. Colors are natural but a bit muted with some speckling present. Detail levels are an improvement over DVD but not especially high. Overall it is definitely an improvement over previous home video releases but there's definite room for improvement. The audio quality is quite good however with a strong presence and crystal clarity from the DTS-HD Master Audio 2.0 mix. It's a big deal for a film that relies on it's soundtrack such as this one for high quality audio and Kino doesn't disappoint in that regard. English subtitles are available. Additional audio options include a pair of commentary tracks the first of which is from historian Bill Cooke, the second from actress Pamelyn Ferdin and is moderated by filmmaker Elijah Drenner. There's also a theatrical trailer to round out the special features.

I recommend THE MEPHISTO WALTZ to any occult film fans. Let Goldsmith's score take hold of you and drive you to the devil along with the movie.

THE MEPHISTO WALTZ is available HERE
Posted by Celluloid Terror (Seth Poulin) at 12:49 AM