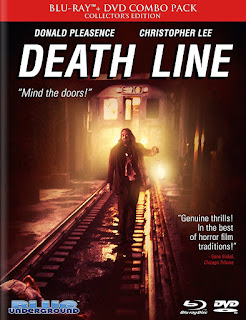 The Film
When a rash of people have disappeared in the London Underground a Scotland Yard Inspector (Donald Pleasance) must investigate the case where he has a suspicious eye toward an American student studying abroad but eventually learns that a group of workers may have survived a tunnel collapse in the 1890s surviving for generations off the flesh of their own dead until now when hunger has driven them to the surface.

From the moment the bassy, baritone groove kicks in over the opening credits you're immediately aware that DEATH LINE isn't going to be a typical horror film. It has a personality all its own from the dark comedy that Donald Pleasance brings in a brilliant performance, to the cold, uninviting subway tunnels and the bellowing calls of "Mind the doors" that are haunting and quite frankly unnerving, DEATH LINE has different tones and vibes that don't always work together, but they come together and compliment each other nicely. 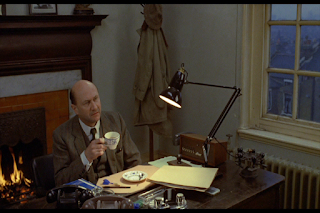 Director Gary Sherman helms an almost entirely British production and makes a film that feels distinctly of its country, surprisingly. It's a bit dry in it's delivery in a way that so many British productions are. That's not a bad thing either. It plays the story straight, with only Pleasance's character and rivalry with Christopher Lee's character who plays a MI5 Intelligence Agent in a lone scene that he plays almost entirely straight to the camera and is incredibly snotty and perfect in it. His backhanded suggestion that Pleasance goes back to planting pot on suspects before he becomes a missing person himself leaves a lasting impression for Lee's lone moment in the film. 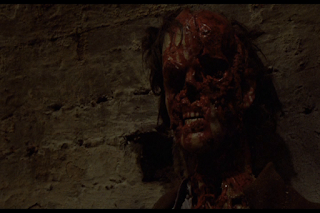 Gary Sherman wouldn't return to the directors chair on a feature film for almost a decade after DEATH LINE when he'd return with a film that has a lot of similarities in pacing and delivery, Dead And Buried, which is severely underrated among horror fans. It is the pacing in DEATH LINE that I think stops it from being an a true classic. It is very much a display of Pleasance's antics and snarky attitude through much of the picture with a few horrific moments sprinkled throughout until the climax. Those sparse moments are quite good however and there is a seven minute tracking shot in the tunnels among the dead and dying tunnel dwellers who suffer from plague, emaciation and countless other ailments that is a masterful sequence. The skill that this scene took cannot be overlooked or underestimated. This was years before Steadicam and it is simply perfect in execution and helps bring a sense of humanity and empathy to the tunnel dwellers. Hugh Armstrong portrayed the male tunnel dweller and was both tragic and nightmare fuel. 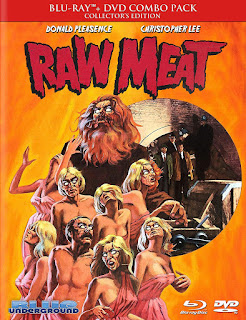 DEATH LINE was released in the US as RAW MEAT which is what I always knew the film to be. I don't think either title is much better than the other but I think the US artwork is a stroke of maniacal brilliance. It is eye catching, striking and bizarre while the standard artwork that you see pictured on this blu-ray release is more in line with the stark, cold tone of the film. No matter which title or poster is used I believe DEATH LINE has been lost in the shuffle over the years, never quite gaining the popularity or acclaim it is deserving of.

The Audio & Video
Blue Underground has given DEATH LINE  a brand new 2K restoration and transfer which looks fantastic! The 1.85:1 anamorphic widescreen transfer has a warm, naturalistic color palette. The picture is sharp with great levels of detail that allows everything from clothing to the special effects makeup look exceptional. The image is clean with virtually no noticeable dirt or debris and skin tones looks lifelike and not at all waxy. An English DTS-HD Mono track is the lone audio option which takes the original mix and brings it to HD quality and it sounds excellent. There's no drop outs, distortions or background noise. The mix allows the dialogue to come through clear while the soundtrack comes in powerful when needed. 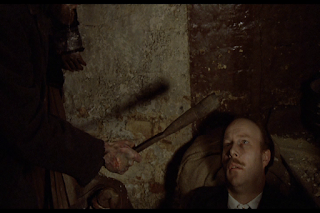 The Extras
Blue Underground has put together a nice selection of special features for this release including: 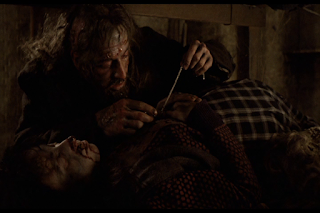 The Bottom Line
DEATH LINE has been a bit overlooked for years but hopefully no longer! This new Blu-ray is the perfect way for new fans to discover the film. If you haven't seen it now is the time to educate yourself with this Blu-ray that has blown me away.

DEATH LINE is available HERE
Posted by Celluloid Terror (Seth Poulin) at 12:32 AM