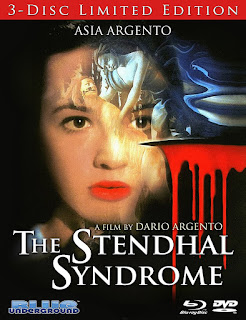 The Film
There's no shortage of great films in Dario Argento's filmography. While he did not invent the giallo he is certainly one of the main reasons the genre rose to prominence in Italy during the early to mid 1970s. Half of the maestro's output fits in to the giallo genre and he has made at least one in every decade since he began directing films with the exception of our current decade, though he does have one in the works titled The Sandman. The popularity of gialli began declining in the late 70s giving way to more gore oriented horror films (not that gialli didn't have their fair share of gore) but Argento found ways keep his gialli fresh enough that they worked even when the genre wasn't in vogue. By 1996 horror and what was popular in the genre was very different from when Dario Argento directed his debut feature film The Bird With The Crystal Plumage in 1970 and the giallo was a mostly forgotten part of horror and Italian film history but Argento was able to craft a film centered around a beautiful protagonist who played the tough role of a police detective but who was also quite fragile and flawed and blended psychological horror, bloody violence and the giallo to create one of the best horror films of the 1990s.

Asia Argento stars as Anna Manni, a beautiful police detective on the case of a serial rapist and murderer named Alfredo. She follows a tip that the killer will be at an art museum at a specific time and while there Manni falls victim to the Stendhal Syndrome, a real disorder that causes adverse physical and psychological reactions when viewing pieces of art of great significance. Manni faints, smashing her lip on a ledge and her purse spills out across the floor, including her gun. She's helped to her feet and back to her apartment when she realizes her gun is missing. Soon after Manni is attacked and raped by Alfredo but escapes with her life. Eventually the two encounter each other again as Manni is abducted by Alfredo but is able to turn the tide on his attacks and badly injures him and kicking him into a river. The police believe Alfredo to be dead but Anna begins receiving phone calls from Alfredo when she meets a young French man named Marie who she falls in love with. Anna's world quickly spirals out of control and everyone closer to her including her psychologist and Marie are in grave danger. 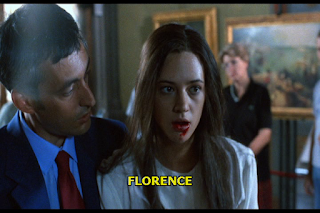 THE STENDHAL SYNDROME is a giallo based in the psychological horror and thriller world but also takes cues from the rape/revenge exploitation films such as I Spit On Your Grave and The Last House On The Left at times. Anna's moment of vengeance against Alfredo is a powerful one that will leave you cheering her as she leaves him a bloody mess. This is Anna's first moment of overcoming everything she had taken from her by him earlier in the film. Sadly that isn't to last as the terror starts again and she again has everything ripped away from her. Asia Argento's character is written in three stages. She stats out as a feminine police officer with long hair, a skirt and attractive blouse. It's immediately evident that her confidence and femininity is taken from her after the initial rape as she chops her hair off in the hospital leaving a more masculine look complete with baggy pants and oversized flannel shirts. There comes a moment when you can see that she wants to reinvent herself, she begins wearing a long blonde wig and finding a new interest in art which is how she meets Marie while shopping for art prints. It's no coincidence that art again plays a major role in her transformation as she is still deeply affected by it but now, at least on the surface, she loves it and surrounds herself with it, even creating her own paintings.

Anna Manni was a brave role to take on. Obviously the physicality and mental suffering the character is exposed to will take its toll. A rape scene is never fun to play and being involved in multiple such sequences only multiplies the intensity of the experience. It goes even deeper for Asia Argento who portrays a character that was named for her sister Anna who died in a motorcycle accident shortly before production began on THE STENDHAL SYNDROME. While this probably doesn't affect your on screen performance I can only imagine that it would be a little voice in the back of your head telling you that you have to do your best in a tribute to your sibling and that can be an emotional weight to bear. Thomas Kretschmann co-stars opposite Asia Argento as Alfredo. Kretschmann had previously appeared in La Reine Margot (1994) with Asia Argento and the pair would reunite for Dario again in 2012's Dracula 3D as the infamous Dracula and Lucy. Kretschmann has had a long and successful Hollywood career for good reason - He's a fine actor and he shows it here. He has limited screen time but is effectively menacing and brutalizing. The perfect mix for a nasty serial rapist and murderer. 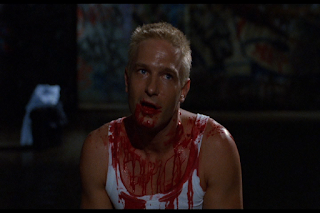 Dario Argento wrote the majority of the film with only changes in small details such as Manni being a cop instead of a lawyer being made by co-writer Franco Ferrini. Argento's story and script are gripping and have just a touch of that "what the fuck?" aspect that gave so many gialli their identity. The reveal of the killer's identity is bloody and gruesome but also emotional and heartfelt. Argento's style is on display here with locations reminiscent of 1985's Phenomena and using locations across various Italian cities to give a natural cityscape and maze of streets and alleyways. The scene of Anna entering a painting and crossing through a waterfall is a beautiful image that you could read into her washing herself of her previous traumas that is juxtaposed against a film full of intense violence. There's a mix of practical effects which smear bloody reds across the screen numerous times but he also mixes in CGI effects for the first time in his career for effects such as paintings melting, scenes of a pill following the esophageal tract and a bullet penetrating flesh. These effects are badly dated and stick out like a sore thumb. I admire what Argento was going for on two out of the three (I don't see the purpose of the pill swallowing scene) and in 1996 we'd judge these effects much less harshly but bad effects are bad effects. Thankfully Argento doesn't rely too heavily on this new found "toy" and keeps things grounded with practical storytelling techniques.

A discussion on THE STENDHAL SYNDROME would not be complete without mention of the brilliant score done by the legendary Ennio Morricone who has worked with Argento five of his films, most recently 1998's Phantom Of The Opera though it had been nearly 25 years between collaboration for Argento and Morricone who prior to STENDHAL hadn't worked together since Four Flies On Grey Velvet (1971). Morricone's theme on THE STENDHAL SYNDROME elicits an emotional response from the viewer, with a dark and almost sad string movement accompanying a haunting woman's vocal cries of "la la la". It is the perfect piece to pair up to Anna Manni's dark journey. 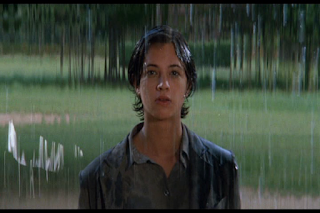 THE STENDHAL SYNDROME gets lumped in to a period of time where fans have harshly critiqued Argento's output often saying he was on the decline or going as far to say that his films were not good by this point. I have to harshly disagree with both of those opinions. Not only do I feel Argento was still putting out very good films in the 90s (Trauma is vastly underrated, even more than STENDHAL) but I feel THE STENDHAL SYNDROME not only fits right in with the classic giallo films of the 70s but is among the best horror films of the 90s. It blends graphic violence with psychological horror and mystery very well while giving us a lead we can immediately get behind and care about all wrapped up in a stylish package that while flawed at times is really quite well made. It's time to for audiences to stop judging THE STENDHAL SYNDROME on what it isn't and appreciate what it is.

The Audio & Video
Blue Underground has delivered what I consider to be the definitive version of THE STENDHAL SYNDROME on home video. Their brand new 2K restoration from the original camera negative shines in the 1.85:1 anamorphic widescreen transfer. Colors are crisp and vibrant, while detail levels are high. Skin tones are natural and not waxy. The overall picture is quite sharp and suffers from only the rare imperfection dealing with artifacting. There are several audio options available including a 7.1 DTS-HD mix, a 5.1 Dolby Digital Surround EX mix and a 2.0 DTS-HD mix all in English or Italian with optional English subtitles. French and Spanish subtitles are also available. The sound quality is rich, letting Ennio Morricone's score envelop you while never interfering or overpowering the dialogue. The levels are mixed brilliantly and I didn't find anything in the way of background noise or damage while watching the film. It's an extremely pleasant listening experience. This is a noticeable step up from Blue Undergrounds previous 2008 Blu-ray release of the film.

NOTE: The screen grabs do NOT represent the new 2K restoration picture quality 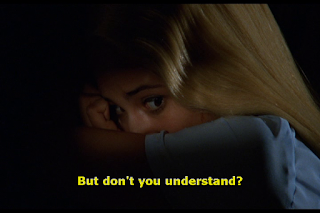 The Extras
The previous Blu-ray release of THE STENDHAL SYNDROME had a healthy selection of special features but this new limited edition release blows it away by porting over all of the old extras and introducing some brand new material as well spread across two discs. 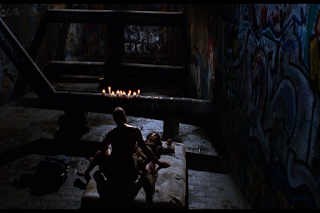 The Bottom Line
THE STENDHAL SYNDROME film is a powerful mix of psychological thriller, horror and giallo and is deserving of being revisited by its harsher critics and there's no better way to watch this later Argento classic than this new Blu-ray from Blue Underground.