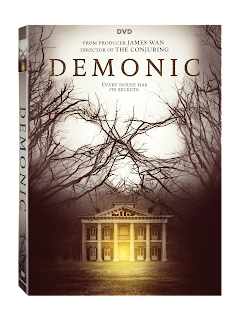 PROGRAM DESCRIPTION
From producer James Wan, director of The Conjuring and Saw, experience the terrifying evil hidden within an abandoned home when Demonic arrives on DVD, Digital HD and On Demand October 10 from Lionsgate. Just in time for Halloween, the film stars Golden Globe® nominee Maria Bello (Best Actress, A History of Violence, 2006) and Frank Grillo as a psychologist and a detective investigating the horrific murders of five college students who were killed while summoning paranormal spirits. The Demonic DVD will be available for the suggested retail price of $19.98.

OFFICIAL SYNOPSIS
The film centers on the aftermath of a horrific massacre where five college students were brutally murdered inside an abandoned home. Detective Mark Lewis (Frank Grillo) and psychologist Dr. Elizabeth Klein (Maria Bello) question one of the few survivors who explains they were amateur ghost-hunters, seeking out paranormal phenomenon at the abandoned house, which was believed to be haunted. But what started out as a harmless activity turned into something truly terrifying.

Thank you for sharing this information! I must visit their website!!!