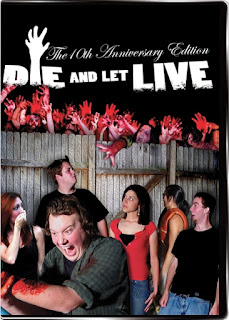 Any film that is completed deserves a certain level of applause. There's nothing quite like trying to get an entire cast and crew together on the same page day after day to complete a single vision. The amount of moving parts required to do so, even with the smallest productions can be daunting so I tip my hat to filmmakers everywhere even if the end result is not a good film. That makes what Justin Channell and his crew of friends, family and everyone involved did in 2006 at the tender age of 18 all the more exceptional. DIE AND LET LIVE was Channell's second feature film and it received nationwide distribution which is something some filmmakers go decades or lifetime without. Armed with the people closest to him, a Mini DV camera and about a thousand dollars Channell unleashed his high school party zombie comedy love letter to The Sandlot DIE AND LET LIVE. 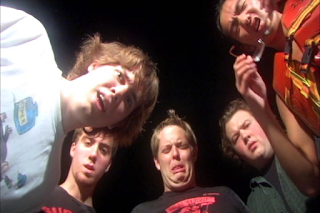 Benny and Smalls throw a party in order to get Stephanie to hook up with Smalls. The party gets out of hand when uninvited guests arrive including a horde of zombies that have broken out of a nearby medical facility. And things get worse when they realize nobody brought potato salad! DIE AND LET LIVE takes standard high school issues like girls, underage drinking and dickhead bros, and plant them firmly in a zombie movie. The movie was written by director Justin Channell and the two stars of the film Zane Crosby and Joshua Lively and you can instantly feel the chemistry these three have. That is something that can't be faked and while this is far from an award winning screenplay and the dialogue is often ridiculous like when the guys discuss the layout of the bathrooms at length it all comes off as natural. Maybe these kids are just a bit quirky or eccentric and really care about the bathrooms? And maybe that girl actually would fuck any guy who bought her pizza (who has the fucking number for Domino's!?). Maybe, just maybe but it really doesn't matter that the dialogue is questionable at times or that the performances are as rough as you might think. It's all genuine. It's genuinely passionate and while that doesn't always count for anything other than trying your best and an A for effort, in DIE AND LET LIVE it is genuinely funny and entertaining. I laughed throughout, actually finding more to laugh at on my second viewing and appreciating it more. 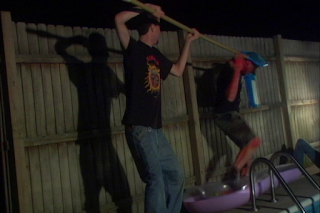 The film is filled with references to the classic 1993 kids baseball movie The Sandlot which pulls at my heart strings. The Sandlot is among my favorite movies of all time and maybe it just works out that I grew up with the film which gives me a warm nostalgic feeling while catching every reference DIE AND LET LIVE through at me from the character names, to the "pickle" they're in and the contraption and plans they come up with to retrieve a set of car keys that is trapped among the zombie horde, I loved it and smiled every time. 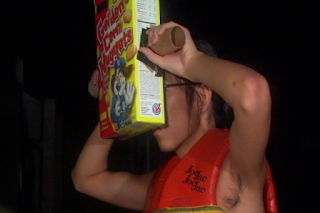 You may think that this isn't a horror movie since up until now I really haven't mentioned anything about the horror aspect of it but it's definitely there. There's plenty of blood spraying from bite wounds and limbs being lopped off with practical effects - no junky CGI here. The effects are somewhat basic at times but they don't take the easy way and throw some shitty computer effects on the screen which movies with a much larger budget are guilty of. This movie is made by a life long horror fan and that just wouldn't fly. I appreciate that. The horror aspect is very much taken from Night Of The Living Dead with the zombies trying to get passed the pool fence and into the party while everyone inside tries to figure out a plan to escape. Or at least get the pizza. DIE AND LET LIVE may wear its influences on its sleeve but it does so with true love and pays proper homage to them. 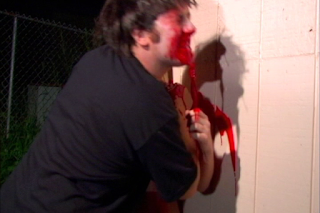 It has now been ten years since DIE AND LET LIVE was made and originally released and Justin Channell has gone back to compile a true collector's edition DVD packed with literally hours of bonus material from multiple commentary tracks to an almost hour long outtakes reel that is new to this release and worth the price of admission by itself. Along with a nearly feature length behind the scenes featurette, alternate and deleted scenes, and more, there's no doubt that every word Justin wrote in the liner notes is sincere. DIE AND LET LIVE is 75 minutes of fun. Is it flawed? Absolutely it is flawed but it's so infectious with it's entertainment that you feel like you're hanging out with the guys instead of just watching a movie. Think of it as you're just quiet Tommy Timmons from The Sandlot so you hang out but just don't say very much. 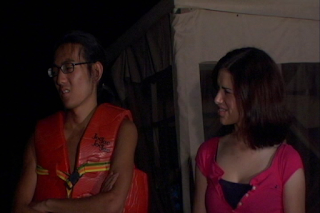 It's incredible. It liked it more than CATS and I'm going to watch it again and again with a pool skimmer by my side in case of zombies. You can get it on DVD HERE and it's available on Amazon Prime as well.
Posted by Celluloid Terror (Seth Poulin) at 4:24 PM