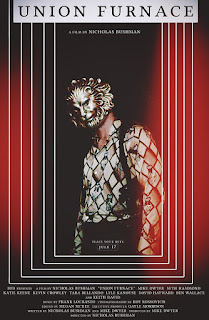 Mike Dwyer stars as Cody, a low life car thief making a few bucks here and there selling to a local chop shop until he's approached by a mysterious man named Lion (Seth Hammond) who offers him a chance to turn his whole life around and make all of his problems disappear. All Cody has to do is win a game ran by a group of uber rich, psychotic gamblers.

UNION FURNACE is driven by the performances of Dwyer and Hammond. Mike Dwyer is a newcomer, having only one previous IMDB acting credit but he feels like an absolute veteran of the screen with an emotional and strong performance. Whenever his character is the featured character of a scene, and that is quite often, he commands attention and has a strong presence. Seth Hammond is also quite good as Lion who spends a large amount of the film behind a Mardi Gras mask which could make dialogue muffled and difficult to understand but Hammond comes through with clear, direct delivery that perfectly embodies the suave, cool nature of his character. The chemistry between Dwyer and Hammond is instantly noticed and only grows stronger throughout the film, hitting a high point during a sit down discussion during an intermission of the game where Lion tells Cody he's the odds on favorite to win. These two are fantastic. The rest of the cast is solid as well including supporting roles from Lyle Kanouse whose name you might not instantly recognize but his face will as he's been featured in over a hundred film and television roles dating back to the 80s. His good natured, soft southern character is immediately at odds with the type of violent and depraved games that UNION FURNACE is filled with but Kanouse perfectly fills that necessary role and is quite lovable as "Jim from Kentucky". We're lucky enough to get quite a bit of screen time from Keith David (Requiem For A Dream) as well. Every film fan knows Keith David and every film he appears in is better for it. UNION FURNACE is no different as David's expertise adds a touch of Hollywood and A-class to the picture.

I will compare UNION FURNACE to a recent and major, widespread release, Rob Zombie's 31. The plots are similar and they both have a bit of ambiguity about them. It wouldn't be fair to compare them in terms of production values and scale since 31 obviously had a much larger budget even if it was lower budget for a Rob Zombie film. It could even be argued that UNION FURNACE has better production values than 31 as it uses it's small, tight locations perfectly while 31 uses a lot of tight camera shots to try and fill the screen colorful set dressing and villains straight out of a video game or comic book world to hide how woefully barren the sets really are. What UNION FURNACE may lack in stylish flair they more than make up for with tight direction.

The stumbling block for UNION FURNACE lies in the writing or perhaps it is the editing. The film clocks in at a tight 89 minutes but the progression of the film is clunky and left me feeling that chunks had been removed throughout to move the film along at a faster pace. This could be a writing decision to not flesh out ideas beyond what we see on the surface of the screen and leave the rest to the imagination or these scenes may have been removed after shooting them to attain a shorter runtime. Either way I feel it brings the film down a notch or two and certainly puts a clog in the flow of film. Even with these bumps in the road UNION FURNACE has tension and a genuine sense of suspense that kept me engaged throughout.

UNION FURNACE is a mixed bag, it suffers from many of the same issues any independent or small budget production faces but it also excels where it is common to simply skate by and hope for the best. The cast and performances raise UNION FURNACE up to a place that makes it absolutely worth your hour and a half despite the critiques I have toward it.