Godzilla is taking over COMET TV!
In September everyone’s favorite fire breathing, stomping monster is back and this time… It’s on COMET TV!

Saturdays in Sept there are double features starting at 2P/1C and Godzilla will be showing up all over the COMET TV schedule, check out the times below!
And.. I know everyone loves their Limited Edition COMET TV Godzilla, so we’re giving you a chance to do a giveaway for a lucky reader to win one! Say wha? I know! You can run the contest anyway you like, a lot of people use rafflecopter, etc…
The Godzilla Doin’ Work Limited Edition pack has:
1 - Limited Edition Godzilla Action Figure: Who doesn’t want to sport some COMET TV swag! Godzilla sure does! He loves COMET TV so much, he’s ripping through his shirt, clearly Godzilla has been hitting the gym!
1 - Limited Edition Godzilla COMET TV Card: Perfect for catching up with Godzilla’s comings and goings on COMET TV! 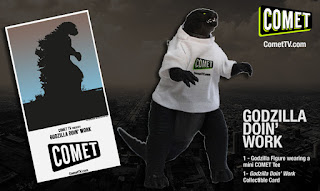 To Enter
1. Email CelluloidTerror@yahoo.com and title it "September Comet Giveaway"
2. Tell me which monster or character in pop culture (movies, tv, comics etc...) that you'd like to see fight Godzilla
3. Include your full name and address

GODZILLA: FINAL WARS (2005)
Godzilla: Final Wars takes us to the 28th century where Earth has been ravaged by giant monsters, giving the Xiliens (a group of aliens who dress like they're in a 90's goth rock band) a chance to claim our planet as their own.
Sunday, September 24 at 1A/MIDNIGHT
Saturday, September 30 at 5P/4C
Godzilla 2000 (1999)
GODZILLA WEARS A TINFOIL HAT. Did you know Godzilla is a UFO believer? Unfortunately, years upon years of reading about alien abduction conspiracies on the internet can't prepare the King of Monsters for what happens in Godzilla 2000....When a UFO is awoken from a million-year slumber deep in the Earth's crust, it employs a series of sneaky tactics (gene-snatching, reckless driving, and more) to give Godzilla a real extraterrestrial beat-down.
Saturday, September 23 at 4P/3C