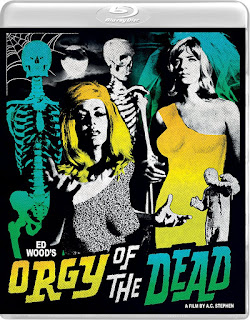 The Film
ORGY OF THE DEAD is a classic piece of 60s sexploitation from a script by the infamous cult filmmaker Ed Wood. This nudie cutie is 90 minutes of topless go-go dancing, booty shaking exiliration. "But what about the plot?" you ask. Well, that revolves around a man and his wife taking a late night drive to a spooky cemetery hoping to get inspiration for the man's next book but a crash sends them rolling into the graveyard and face to face with the rituals of the Master and his servants which include a Vampira ripoff and the hammiest mummy and wolfman you've seen lately as they punish a group of sexy undead women for their sins and dirty deeds committed while alive.

And really most of that punishment is dancing around the graveyard, which actually has a good look and design while a fog machine goes full force before they're wisked away by the Master's servants for all eternity. I'm not complaining about it, these women are gorgeous. 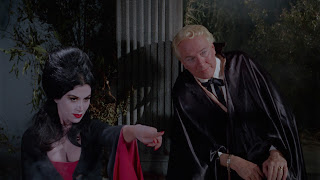 That sums up ORGY OF THE DEAD. Beautiful woman after beautiful woman dancing her heart out to a jazz number that has been influenced by too much time in a haunted house while wearing very little at all or a corny costume (see the Cat Lady). Most of these women went on to do very little acting other than this picture as they were hired for their dancing abilities. The exception to this is Nadejda Dobrev who has had a sporadic but respectable acting career that continues to this day. She wasn't asked to do anything more than the other girls however. The real star of the show is Criswell, who portrays the Master and spends the majority of his time reading off of cue cards and not making eye contact with anyone he's supposed to. He's wonderfully cheesy and not at all threatening. He's probably the most memorable thing besides the girls but not mentioning Fawn Silver who is credited as The Black Ghoul which is really just codename for Vampira Ripoff is great. She may not be Vampira but she's got the look and carries herself with that same sort of confidence. She may be the best part of the cast. 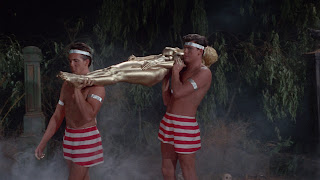 The Audio & Video
Vinegar Syndrome has given ORGY OF THE DEAD a brand new 2K scan and restoration from the original 35mm camera negative and you couldn't ask for a nicer presentation. Presented in a 16x9 anamorphic widescreen transfer, the colorful costumes are vibrant and have just enough pop to them to really look exceptional. The black levels are deep with no compression or blocking issues. Detail is great on surfaces and textures from the various headstones and set dressing around the cemetery to the silkiness of Criswell's cape that you can almost feel the silky smoothness in your hands. That'd make for a nice pair of bedsheets... or undies. The audio is presented in a DTS-HD Master Audio mono track that is perfectly balanced between the dialogue and the moody, jazzy score. There's no distortion or damage to the track and it is also free of background noise. 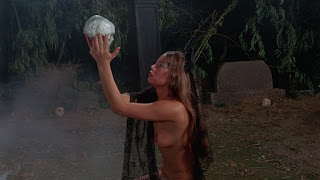 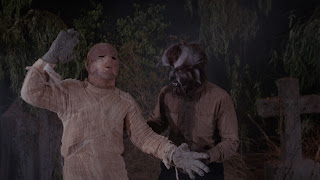