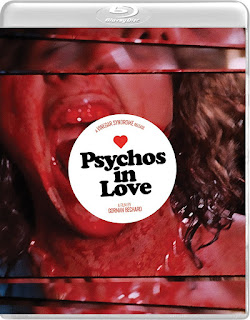 The Film
How crazy can one movie get when a couple who hate grapes and love murder fall in love? Pretty damn crazy. And stupid. And funny. And stupid.

Prior to this viewing of PSYCHOS IN LOVE I had very little exposure to the film. In fact, I really had no exposure to the movie itself. I had only seen the big box VHS artwork and knew it was released by Charles Band's Wizard Video label in the 80s and has since become sought after tape for that reason alone despite most opinions of the film being bad and trashing it. I had rarely heard anything positive about it with the most common words associated with the movie being "sucks" and "shit".

Well I will say it is unbelievably stupid. PSYCHOS IN LOVE is a parody of the shot on video splatter films of the 1980s with ridiculous dialogue, intentional goofs and repeated breaking of the 4th  wall. There are moments where actors will speak directly to the director who is off screen, boom mics fall into frame and mess with the actors and the cast will speak directly to the audience. This all coming from a story that involves a new couple who has fallen madly in love because of their mutual disdain for grapes and their passion for murder. If there's a more solid foundation for a relationship I haven't seen it.

PSYCHOS IN LOVE has its tongue planted firmly in its cheek so if you're expecting a dark, serious horror film filled with gore you're going to be disappointed. There's plenty of gore as the movie has a pretty decent sized body count with various limbs being lopped and throats slit but it's intentionally campy and comedic but practically well done. One 80s horror trope that PSYCHOS IN LOVE didn't pass up was nudity. There's a lot of gratuitous nudity and all of it is nice eye candy. 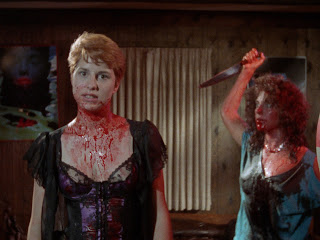 PSYCHOS IN LOVE is a lot of stupid silly fun but it is definitely flawed. The film was written by Gorman Bechard, who directed the film, and Carmine Capobianco who stars as Joe. The duo wrote large chunks of the script in a strip club which is funny because one second I think "Wow, this movie is pretty decent for being written in a strip club" and then I follow that up with "This is exactly the type of movie that you could write in a strip club". It's clever and goofy but it almost relies on luck for the jokes landing or working. A single stupid line of dialogue makes the ridiculous grape hatred plot device work while there's an endless number of equally ridiculous and random plot devices that would have fell flat on their face. Luckily Carmine Capobianco and his co-star Debi Thibeault are great together and both genuinely funny with this material. Their performances are stilted and uneven but genuine and it works. The material simply works with their delivery and they're a pleasure to watch.

I think PSYCHOS IN LOVE is one of those utterly ridiculous movies that will be infinitely re-watchable for how stupid it is. It could be billed with some of the infamous so-bad-they're-good movies but it wouldn't be fair to lump it in with them as the filmmakers knew what they were making with PSYCHOS IN LOVE and made an intentional parody that definitely brings more laughs than groans. 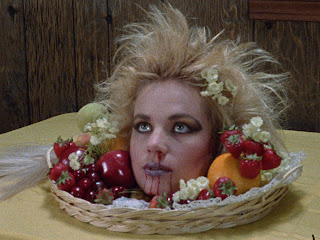 The Audio & Video
Vinegar Syndrome has given PSYCHOS IN LOVE a new 2K scan and restoration from the original 16mm camera negative and it has resulted in a really nice looking 1.33:1 full frame transfer. Given that this movie was shot on 16mm it won't have quite the same amount of detail and clarity as a film shot on 35mm would but it still looks quite nice. The picture is clean and free of any dirt and debris. There's a good sharpness and natural grain structure that lets you know you're watching a movie that was shot on real film. The audio is presented in a DTS-HD Master Audio Mono track that sounds crystal clear and crisp. There's no damage such as hissing or popping and there's no background noise. The track balances dialogue and music nicely. 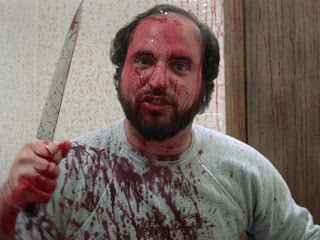 The Extras
This release features one of the most impressive slate of special features that Vinegar Syndrome has compiled to date and it includes: 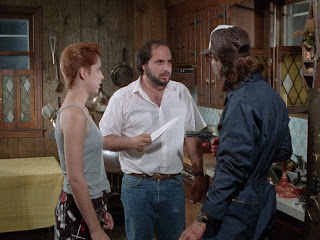 The Bottom Line
The high definition debut of PSYCHOS IN LOVE is a damn good one. Vinegar Syndrome not only gives the film a stunning restoration they've also packed the release with enough extras until next grape picking season. I highly recommend this one!