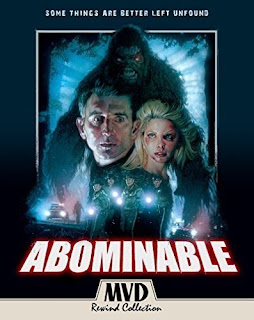 The Film
After a climbing accident that has left him paralyzed and his wife dead, Preston Rogers returns home to his cabin and finds the girls partying at the neighboring cabin under attack by a Bigfoot. With phone lines down they must fend for themselves and fight for their lives against the giant mythological creature that is all too real.

Made in 2005, ABOMINABLE had every possibility at being a worthless Z-grade piece of junk like many Bigfoot horror films are. Thankfully ABOMINABLE is better, much better, than many similar films. Writer/director Ryan Schifrin creates a simple yet time tested story that combines elements of Hitchcock's Rear Window and every killer-in-the-woods slasher film you've ever seen and crosses them with a man-in-a-suit Bigfoot monster. Add in doses of blood and gore, supporting roles from Lance Henriksen and Jeffrey Combs who is absolutely hilarious in his limited screen time and there's a recipe for success that nobody involved with the movie would allow themselves to mess up. The cast is capable if not good and the special effects are well done including the suit which doesn't look cheap or questionable and the face is menacing. The only iffy aspect of it are the eyes which have been digitally enhanced to fix them and it works out nicely. 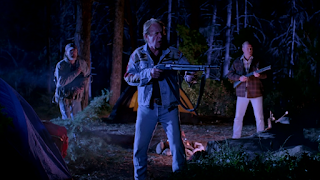 There's back breaking, face eating, shotgunning and needle stabbing. Nudity and blood and soy milk hunting. ABOMINABLE doesn't try to be anything it's not and knows exactly what it is but doesn't take the cheap way out in going for the intentionally bad and overly stupid route. Ryan Schifrin plays the film straight but with a light hearted attitude. It's a fun movie and is better than most creature features or slashers that have come out since but doesn't sell itself short. ABOMINABLE is a freaking blast and is pretty well put together too. If every Bigfoot horror movie was this good I'd own a lot more of them. ABOMINABLE should be one of the Bigfoot movies that other Bigfoot movies are held to the standard of. ' 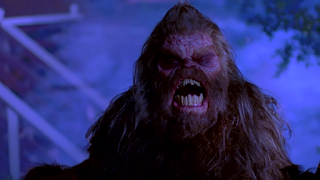 The Audio & Video
ABOMINABLE has receiving its high definition debut courtesy of MVD Visual as part of their MVD Rewind Collection and features a brand new 2K scan from the original negative. The anamorphic widescreen 1.78:1 transfer looks absolutely gorgeous. Colors are rich and vibrant, shining off the screen. Reds pop and black levels are deep and free of any blocking or compression issues. Detail is high and only gets better with tight shots. The audio is presented in an uncompressed PCM 5.1 surround mix that sounds crystal clear and has everything you'd ask for it in a mix and none of the damage, background noise or distracting issues in a lesser quality audio mix. 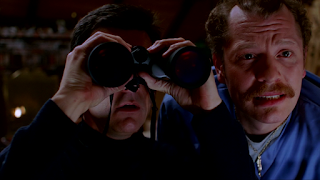 The Extras
As is usually the case for the MVD Rewind Collection, this release is jam packed with extras including a mini poster included in the case. On disc extras include: 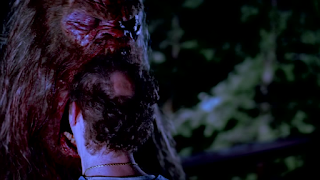 The Bottom Line
ABOMINABLE is everything I hoped it would be; a highly entertaining Bigfoot romp that just plain gets it.

This movie surprised me when I first viewed so much fun! Well worth the upgrade to Blu!