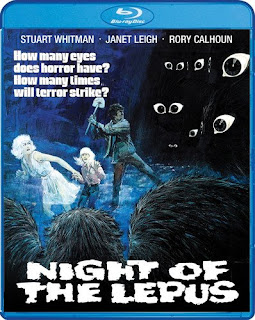 The Film
A small farming town is having trouble with their crops being devastated by the rabbit population. A pair of scientists are brought in to handle the problem without poisons that have dangerous side effects. The hormone they introduce into the population to slow the breeding cycle of the rabbits instead turns them into giant bloodthirsty beasts and the crops being eaten is the least of the town's problems!

Killer animals and nature run amok was a big theme for horror in the 70s and 80s and I love the subgenre from killer fish to giant bears and mutated this and that I do love seeing Mother Earth and her creations taking out asshole humans even if there's some collateral damage of losing some genuinely nice folks too. It's just plain entertaining watching giant or deadly versions of things we're familiar with getting down and dirty and perhaps the most unsuspecting killer beast in film history is the bunny rabbit. Yes, killer rabbits. Those cute and cuddlys that hump like crazy are usually not the cause of your nightmares unless you're named Elmer Fudd but in NIGHT OF THE LEPUS you're going to have to fight Bugs, Peter, Roger and hell, even the Velveteen Rabbit because they're out for blood.

NIGHT OF THE LEPUS is pretty much what you'd expect. It's a premise that has worked time and time again but would it work with rabbits? Sure it does. The action gets started quickly and never lets up. There's scene after scene of rabbits running around miniature farms that make them look 15 feet tall. Splash a little food coloring around their mouths and get some extreme closeups of those front teeth and you have a pretty menacing villain even if there's not much at all in the way of graphic violence. NIGHT OF THE LEPUS is campy but it is meant to scare even if it doesn't send chills down your spine it does have a message warning of the dangers of using poisons and hormones to manipulate the environment and local ecosystems and the havoc it can cause.

The film features a good cast with Rory Calhoun starring as the rancher in need of help from the scientists played by Stuart Whitman and Janet Leigh. There's a strong horror heritage in the cast with Janet Leigh starring in Alfred Hitchcock's Psycho and Rory Calhoun going on to star as Farmer Vincent in Motel Hell several years later. NIGHT OF THE LEPUS wouldn't be Stuart Whitman's last time battling animals as he went on to portray the sheriff in Tobe Hooper's giant alligator movie Eaten Alive. The cast is good with their long Hollywood careers on display as they capably handle the campy material to make it believable. The children actors are a bit rougher around the edges as you would expect but aside from corny writing for them they're fine. Director William Claxton spent most of his time directing television episodes including many westerns which certainly bleeds over into NIGHT OF THE LEPUS from its dusty ranch town setting to many cowboy-esq characters and shootouts. He even uses the patrons of a drive-in theater to herd the rabbits towards the train tracks for the finale so there's plenty of cowboy culture on display in this and his direction is competent. He features the rabbits in a way that would make Roger Corman happy giving the audience a constant dose of action and thrills and does his best to keep them looking like a threat even if the thought that cuddling a 15 foot rabbit would just be 15 times more fun than cuddling a normal rabbit would be lingers in the back of your mind. That's a challenge for NIGHT OF THE LEPUS and everyone involved and they do a good enough job of making it all work.

Grizzlies, sharks, snakes and dogs all make for more terrifying and frankly believable natural monsters than a rabbit ever will but NIGHT OF THE LEPUS finds a way to make it work and is an entertaining slice of nature run amok cheese even if it isn't the most thrilling of the bunch.

The Audio & Video
Scream Factory gives NIGHT OF THE LEPUS its Blu-ray debut with a nice release featuring a new 2K scan from the interpositive. The 1.85:1 anamorphic widescreen transfer maintaining the film's original aspect ratio. Overall picture quality is strong with good detail, particularly in close-ups. Rabbit furs, skin textures and surfaces all show finer detail in the tight shots. Colors are natural and balanced while reds pop just enough. There's a healthy grain presence and no signs of waxiness. The audio is presented in a DTS-HD Master Audio mono mix and it sounds quite nice. The mix is simple but crisp and clear with no distortions or issues and balance is perfect.

The Extras
A pair of brand new audio commentary tracks with author Lee Gambin and pop culture historian Russell Dyball make up the meat and potatoes of the special features and they'e rounded out by a theatrical trailer, TV spot and still gallery.

The Bottom Line
Nature's revenge seems like a lost theme in horror movies even as we are dealing with many of the same environmental issues as we did decades ago and even though rabbits devastating ecosystems and farmlands isn't a big problem it's still a great and unexpected set up for a horror movie and it doesn't disappoint. NIGHT OF THE LEPUS is schlocky and fun with no downtime!

NIGHT OF THE LEPUS is available HERE
Posted by Celluloid Terror (Seth Poulin) at 4:29 PM