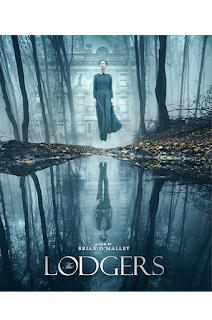 The Film
Rachel (Charlotte Vega) and Edward (Bill Milner) are orphaned twins living alone in their family's crumbling estate, haunted by a family curse. As long as they obey the curse's rules of being in bed by midnight, no strangers in the house and if you try to leave the other will die, the curse will leave them alone. But now as they've grown to be adults the curse becomes more overbearing and demanding of them and Rachel sees her chance to leave it all behind when she has a romantic encounter with a local man from the village who has to deal with his own type of curse; the horrors of war.

THE LODGERS is a gothic romance horror film that feels straight out of the 1960s. It feels like a film of another time, more interested in mood, tone and characters rather than loud obnoxious scares devoid of any substance. Director Brian O'Malley is more concerned with getting an emotional response out of the audience than pandering to the lowest common denominator of fright berating them with volume. Charlotte Vega flourishes as the troubled Rachel who not only has to deal with her cursed existence but also in fighting off her brother's romantic advances and the family's accountant played by David Bradley (Argus Filch of the Harry Potter franchise). Edward's longing for his sister is an uncomfortable scenario and one that shows Edward's fractured mind. He is terrified of the curse and follows their rules to a T. His incestuous lust is almost understandable however as he has been locked in the house with his sister alone for years and knows nothing of the outside world. Rachel tends to the day to day needs including going to town for groceries every so often, it is there where she's followed home by Sean, a veteran of the war who not only lost his leg in battle but now has to face the bigoted locals who don't like that he served. 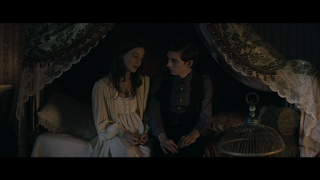 You must be patient with THE LODGERS, it is not meant to bombard you with scares and action. Instead David Turpin wrote a very deliberate script that burns slowly and builds to a crescendo with important beats along the way. Your patience will pay off with a story rich in story and mood, with characters you come to know and have real feelings for for better or worse. Enjoy the landscape of the forest and the breathtaking mansion that is dripping and crumbling around the twins and acts as a symbolic structure for their entire existence. There's plenty of imagery that will be etched into your memory for some time to come. Take note of any scene at the lake and how well composed they are.

THE LODGERS deserves to be seen and it deserves discussion. There are horror films that have been released wide in theaters over the last few years that wish they were as stylish, moody and well acted as THE LODGERS is including those with gothic backgrounds. If THE LODGERS proves anything it is that there is still plenty of life in gothic horror and that a horror film is a fine setting for a romance. It always was. 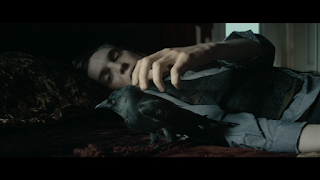 The Audio & Video
Epic Pictures delivers THE LODGERS on Blu-ray with a stunning transfer that perfectly translates the film's gothic setting to disc. The film's color palette is intentionally drab, heavy in grays and age faded hues but those tones look exceptional. Detail, including finer details is well defined and black levels are deep and inky. Skin tones are natural with no signs of excessive DNR. The 5.1 Dolby surround mix sounds excellent, balancing delicate sound effects with the dialogue and score. The track is crisp and clear and is quite pleasing to the ear from start to finish. Numerous other language and subtitle options are available including English, Spanish, French, German, Portugeuse and more for the subtitles. 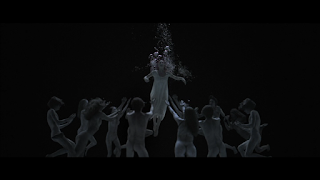 The Extras
-Mini Behind The Scenes Documentary
-Deleted Scenes
-Trailers 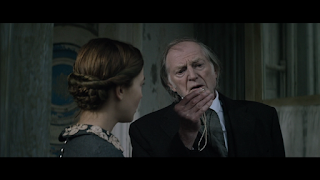 The Bottom Line
THE LODGERS nails the gothic tone and successfully balances horror and a twisted romance and should not be overlooked by horror fans who prefer a touch of class with their scares. A definite recommendation.

THE LODGERS is available HERE
Posted by Celluloid Terror (Seth Poulin) at 11:18 PM