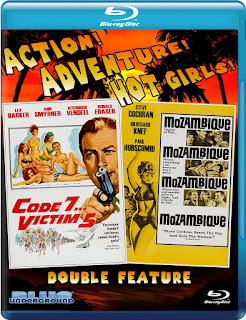 The Films
CODE 7, VICTIM 5 stars Lex Barker as Wexler, a private detective hired by a South African millionaire for protection and to solve the murder of his butler. Upon arriving Wexler meets all the people associated with the millionaire, including his family, business partners and men from his past that may hold the key to the killings as they all appear in an old war photo together. Car chases, fights and shoot outs become the norm as Wexler tries to unravel the mystery.

CODE 7, VICTIM 5 is an entertaining crime thriller that is straight forward in its delivery of a decent mystery that puts everyone involved in immediate danger. The direction is solid and the photography by Nicolas Roeg is beautiful. Lex Barker is a Bond knock off without all the gadgets and is more than capable of it. He's the man to handle all of the bikini clad eye candy running around while solving the crime. The film is more violent than I had expected with more bloodshed than I could have guessed.
All of the elements come together making CODE 7, VICTIM 5 an exotic crime flick that is a fine film.

In MOZAMBIQUE a broke and out of work American pilot is offered a job as a cargo pilot making runs between Mozambique and Lisbon. He quickly finds himself in a web of kidnapping, murder and smuggling. The pilot's focus changes from making a buck to finding out the identity of the person that has put his life in danger.

The exotic setting of Mozambique should be interesting and beautiful, adding to what could have been a thrilling potboiler from director Robert Lynn. Instead the film is dreadfully dull. As fun and thrilling as CODE 7, VICTIM 5 was, MOZAMBIQUE feels that soulless. The score is slow and drawn out, especially in the big climactic ending which could have made the entire film worthwhile to sit through but instead it is a letdown with an incredibly bland score that doesn't fit. The best thing I can say about MOZAMBIQUE is that it's competently made.

This double feature of Robert Lynn films from 1964 show the best and worst of what the director could do and in very similar vehicles. On the surface they're almost identical plots in exotic locales but the paint by numbers MOZAMBIQUE doesn't take advantage of just about anything it had going for it while CODE 7, VICTIM 5 revels in being an exciting detective romp that is surprisingly violent.

The Audio & Video
This Blu-ray from Blue Underground marks the U.S. home video debut for both of these films and it wastes no time showing how good it can look in the opening scenes of CODE 7. The vibrant colors of costumes and decorations in a festival scene are gorgeous and vibrant. This carries on throughout both films and at its best the PQ lives up to those moments with very strong detail down to facial hair stubble and the texture of clothing with a natural film look and grain structure. At its worst the disc has some noticeable digital scrubbing that takes the PQ down a step but never to the point of looking offensive or bad. The image on this disc is good, even at its worst and fantastic at its best. The English audio track is a DTS-HD Mono mix that is crisp and clear. There's no distortions or background noise. Blue Underground took the original mix for these films and made them sound excellent in HD without needing to create gimmicky new surround mixes.

The Extras
Theatrical trailers for each film are included

The Bottom Line
I wish both of these movies were as good as CODE 7 - I still recommend this pulp crime double feature.