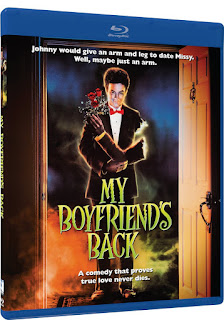 The Film
Johnny Dingle has had eyes only for Missy McCloud since they were small children and now Missy is the hottest girl in school With prom approaching Johnny concocts a scheme to get Missy to be his prom date but things go awry and Johnny winds up dead. The grave can't contain Johnny after Missy has already said yes though so he's back from the dead and ready to party... if he can keep himself together.

MY BOYFRIEND'S BACK is a charmingly funny high school comedy romance with an interesting idea behind it. The cast, including Andrew Lowery as Johnny and Traci Lind as Missy are great and have good chemistry. It's a cute mix between the Brat Pack pictures of the 80's and the more family friendly horror trend of the later 80s. Unfortunately the movie relies on two or three recurring gags that lose a bit of their punch with each recurring use. Body parts falling off an inopportune times is funny but it turns the film into a one trick pony by the end.

When it's all said and done MY BOYFRIEND'S BACK is a mixed bag as many of the jokes are repeated too often and the story of Missy's dad, along with most of the town, wanting to kill Johnny because he's a zombie become stale too quickly. The relationship between Missy and Johnny help carry the film passed these issues and keep things light and fun enough to be an enjoyable viewing experience.

The Audio & Video
Mill Creek gives MY BOYFRIEND'S BACK its debut on Blu-ray with an attractive 1.78:1 anamorphic widescreen transfer that is largely very well done. The image is sharp and has a warm color palette. Detail level is often quite strong in surfaces and textures but there is some light digital noise reduction noticeable, heavier at certain points than other, that give the image a slight waxy quality. There's also a couple incidents of edge enhancement that could have been passed up with no damage done. Skin tones look healthy and natural when they aren't dealing with the DNR issue and black levels are deep and don't suffer from any sort of crush or compression. There's a bit of speckling scattered throughout but the picture quality is quite clean and free of any debris for the most part. The Dolby Digital surround mix is nicely done, with a crisp quality that is free of any damage or background noise. The original score by Harry Manfredini and the soundtrack of 80s and 90s pop rock tracks blend nicely with the dialogue. Overall the technical quality of the disc is imperfect but a damn fine job that fans of the film will welcome with open arms that hopefully don't fall off.

The Bottom Line
There are some flaws that keep MY BOYFRIEND'S BACK from being held in the same regard as the classic teen comedies of its era but it's still an entertaining, lighthearted comedy that brings the laughs often enough.

MY BOYFRIEND'S BACK is available HERE
Posted by Celluloid Terror (Seth Poulin) at 3:27 PM