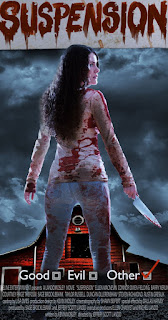 SUSPENSION tells the story of Emily, an unpopular high school girl still coming to terms with the fact that her father went on a murder spree years before. To help her cope, she draws a graphically violent comic fictionalizing the murders. But as she loses herself in her own story, the line between what's real and what's not begins to blur.

SUSPENSION is the first film I've watched as part of 2015's "8 Films To Die For", and I have to admit that going in I didn't really hold out much hope for any of them. That being said, SUSPENSION was actually pretty decent. I got real excited by the opening title sequence which was just an overhead shot slowly following a truck as it pulled up to a barn. Yet there was a filter on the shot that made it appear to be a comic book style line drawing. While this isn't anything we haven't seen before, I thought it was an interesting stylistic choice that not only looked pretty cool but tied in with the theme of the comic our main character is drawing throughout the movie. In fact, SUSPENSION is filled with a lot of interesting stylistic choices that I really appreciated. Unfortunately, the plot of the film is just pretty by the numbers. The movie is filled with plot twists that anyone who's ever seen a horror movie can see coming from a mile away. And ultimately, Suspension becomes another horror movie that looks good, but doesn't really have a lot of substance.