Vinegar Syndrome gives us two re-releases this month, this double feature of the CANDY films by Gail Palmer being an upgrade to Blu-ray over the previous Peekarama Collection DVD released back in July of 2014. This is a welcomed upgrade over an already attractive version that really could (and did) stand on its own two feet. 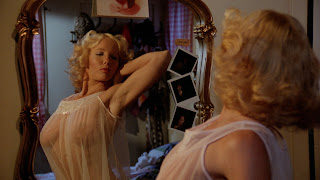 This Blu-ray carries over all of the same content as the DVD which was reviewed upon its release. You can see that review HERE. Instead of writing all the same things over again I will save you time by saying the picture is sharper, with more overall depth but especially in details such as clothing and surface textures. The skin tones look gorgeous with a natural fleshiness that only a well done Blu-ray transfer can really convey. The upgrade from an already well done DVD is immediately and constantly noticeable. 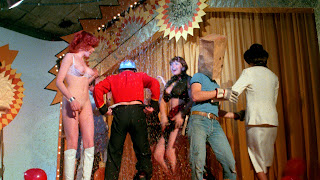 Note: There's a single frame digital glitch at the end of the first film, just before the credits which is the result of a manufacturing error. This could easily be overlooked but Vinegar Syndrome has already begun repressing corrected discs and is setting up a replacement program for those that have already purchased the disc. You can get in contact with them on their Facebook page for more information.
Posted by Celluloid Terror (Seth Poulin) at 10:44 PM