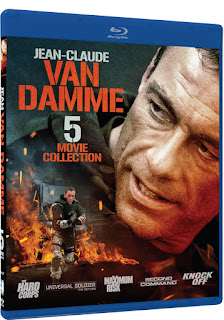 The Films
MAXIMUM RISK
The film to start this package off is a perfect example of a mid 90s action flick starring an action star who had already made his best films years before. Unfortunately for the rest of this collection JCVD is our star in every film so I'm afraid that fact will remain sadly true. That said, the film has no shortage of action though it feels like it was made with weekend cable screenings in mind. The high point being the scene in the subway station where we get to see a dummy hit by a speeding subway car. The story of mistaken identities, and finding out family history feels rehashed but a couple nude scenes with co-star Natasha Henstridge keeps things interesting when the action is at a lull. An average but harmless flick.

DOUBLE TEAM
There are some things that don't make sense to me about this movie. Things like why the opening credits look like they were made with a label maker? How the hell did Dennis Rodman make it into a major motion picture? What is Mickey Rourke up to these days? You know, life's hard hitting questions. The action comedy mash up is filled with explosions, shoot outs and fantastic fight choreography but the action is the only thing keeping my attached. The story is weak, the acting is weak (how many lines can Rodman mumble his way through?) and the promise of Van Damme fighting a tiger ends up being a letdown. Oh and let us not forget how much Coke product placement there is and that our heroes are literally saved from a massive explosion by a fucking vending machine.

UNIVERSAL SOLDER: THE RETURN
The 2nd theatrical film of the series followed a pair of made for TV films and bombed at the box office and is no longer considered canon to the series. How could a JCVD vehicle from 1999 that was the fourth film in a series that had already went to TV productions for sequels twice and co-stars Bill Goldberg bomb at the box office and essentially be written out of the franchise's history you ask? It looks and feels like a video game that was already outdated by the time it was completed. I'm not at all familiar with the UNIVERSAL SOLDIER series so I don't know how this fits in but since it has been disowned I suppose it doesn't really matter. There's plenty of action but most of it feels like an amusement park thrill ride. It's always nice to see Michael Jai White and the soundtrack has some solid metal bands on it so I guess there's that.

THE HARD CORPS
A lumpy headed (seriously, what is that giant lump on Van Damme's forehead?) Van Damme plays a depressed former Army Special Forces soldier suffering from PTSD who gets a gig protecting a former boxing champion from a violent thug he sent to prison. Too much is asked of Van Damme here. He's not a great actor and it shows throughout this one but to be fair just about everyone else in this movie gives weak performances too. There's nothing funny at all about PTSD but the scene of Van Damme at the rap concert is unintentionally hilarious and that shows how much of a failure this movie is.

SECOND IN COMMAND
The final film of the set redeems things a bit after the low point that was THE HARD CORPS. SECOND IN COMMAND is an entertaining war film starring Van Damme who leads a small group of US Marines who are fighting in Eastern Europe to protect the president of Moldavia from being kidnapped. The setting is interesting giving us a tight urban environment filled with shoot outs and tense moments. It's competently written and directed and the acting is okay. This is probably the most violent film in the collection.

The Audio & Video
The first disc features the first three films reviewed above and they all looking pretty good. The picture quality is sharp with nice colors and good detail level throughout. Black levels are generally handled well with very few issues of blocking or compression. Audio is crisp with no damage or background noise. The second disc features the final two films on the set so you'd imagine image quality would fare a bit better or at least be as good. That isn't the case as THE HARD CORPS and SECOND IN COMMAND use obviously dated masters and don't look much better than an upconvert to HD. Detail lacks and colors don't shine like they would in a proper HD transfer. SIC is rather hazy and soft as well. Oddly enough the worst looking movies in the set are the most recent productions. The audio on this disc is fine, comparable to the first disc.

The Bottom Line
The films are a mixed bag with some good, some bad but mostly everything is in the middle and just okay. If you're a big JCVD fan the set is a no brainer and at the bargain price point that Mill Creek is offering this collection of films at if you're even remotely interested in it you'd be a fool not to give it a chance.

Hi one question in movies the spanish audio?

Thanks you sorry for my inglish

English only with no subtitles, sorry!

Afraid so. English audio only and no subtitles across all 5 movies.

Thanks you very much