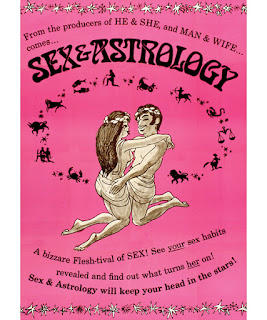 The Film
SEX & ASTROLOGY brings the viewer on a trip through time and space to bare witness to the sexual side to each of the twelve signs of the zodiac all while Venus looks on with a pink cupid and his blue wife.

SEX & ASTROLOGY is pure midnight movie gold. Through and through, it is a sexually charged, piece of probably drug induced art that is right at home in 1971. The film has virtually no dialogue, letting a narrator describe to us the personality and sexual desires of each zodiac while we get to watch a plethora of uncredited actors and actresses get it on. While this is most definitely a hardcore adult film there's only a few actual penetration or more hardcore shots, most of this feels and looks a bit softer than it actually was but it doesn't hurt the film at all. 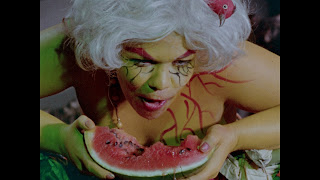 The Audio & Video
Vinegar Syndrome have SEX AND ASTROLOGY looking quite good. It's evident that the movie was filmed soft, dark and sometimes in various colored lighting that washes out much of the picture. While there's nothing VinSyn can do about the way in which the film was photographed they've done a nice job on their 2K scan from original 16mm elements. The picture still has some scratchles and speckling and the odd piece of debris or hair but colors are strong and vivid and there's a nice sharpness to the picture. The mono Dolby Digital audio sounds very good with no background noise present. It's free of any distortions or audible hiccups. The majority of the sound comes from the score and narration so it sounds quite nice. 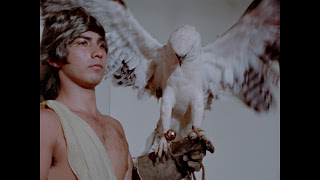 The Extras
The original theatrical trailer is included. 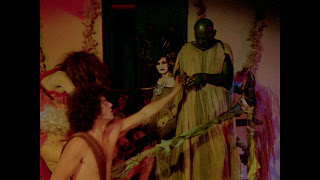 The Bottom Line
Compared to other Vinegar Syndrome releases SEX & ASTROLOGY may seem a bit on the tame side despite having plenty of skin on display but there's a fantastic oddball midnight movie quality to the entire picture that makes this one stand out from the pack in an almost stage play sort of way.