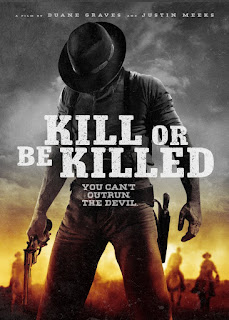 The Film
Sweet Tooth Barbee and his gang of outlaws are on a desperate ride across the inhospitable terrain of Texas to recover their hidden loot from a previous robbery but with a bounty on their head and plenty of other ruthless killers riding the area their ride to riches becomes a fight for survival.

KILL OR BE KILLED is a violent, revisionist western in the spaghetti style. There's no shortage of fist fights, shoot outs, and bloodshed left in the wake of Sweet Tooth's gang. While that makes for a fun western if doesn't make for an engaging western as the majority of the characters are paper thin, and the story couldn't be more one note. It is nothing more than a timeline of places where another fight takes place in the travel-fight-sleep-repeat pattern.

The focus on travel does allow the filmmakers to show off the sprawling Texas landscape where KILL OR BE KILLED was shot and they manage to capture that epic landscape nicely with some nice photography. Sadly at times it seems certain filters are used on the camera that soften the look and cheat us of some of the vivid colors that the natural terrain has to offer. 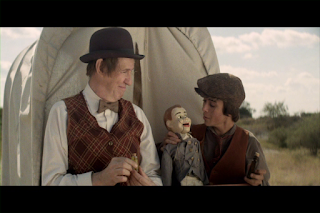 Performances are solid from top to bottom, with big points going to Brider Zadina as the young ventriloquist who's growth from a medical swindler's sidekick to a young man hardened by the west and the men around him may be the most interesting part of the film. There's other interesting things that never quite fully develop and left me feeling unsatisfied.

That feeling carried on through much of the film - I think westerns work because you can completely lose yourself in the setting and the characters. They engulf you from the scenery and the characters to the music. KILL OR BE KILLED felt a bit like an imitation western almost as if someone read the tropes of the genre and made a movie that they thought would be the real deal. I know this isn't the case because directors Duane Graves and Justin Meeks show talent throughout but moments of CGI blood spray and uneven special effects pulled me out of the film. Westerns, to me, need a feeling of authenticity and at times KILL OR BE KILLED loses that feeling.

KILL OR BE KILLED is uneven throughout. There's some beautiful compositions and decent performances but there's also a one note story and questionable direction that makes this feel more like a cheap action movie than a western. It's a missed opportunity at being an impressive contemporary western.

Side note- This movie was originally called Red On Yella, Kill A Fella which I think is not only a far more original name but it better suits the film as well.
The Audio & Video
Image RLJ Entertainment's 2.40:1 anamorphic widescreen transfer looks good with no compression or blocking even during the dark scenes. The picture is clean and has pretty strong detail for a standard DVD. The colors are reproduced nicely but the way the movie was shot doesn't always allow them to shine leading to a soft picture. The 5.1 Dolby Digital mix sounds great, with a powerful mix allowing for the loud bangs of gunshots to ring true and the traditional western score to become a bit infectious. There's no background noise or distortions to the audio mix. 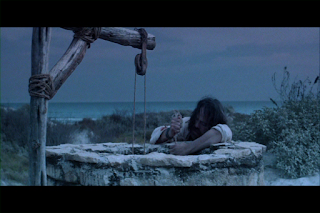 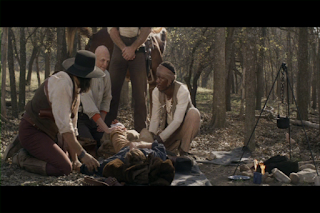 The Bottom Line
Casual western fans may be more forgiving to KILL OR BE KILLED but they'd also be better served digging deeper into an unsung classic of the genre. It's the double edged sword that the movie itself is. You take the good with the disappointing.

KILL OR BE KILLED is available HERE
Posted by Celluloid Terror (Seth Poulin) at 1:39 PM