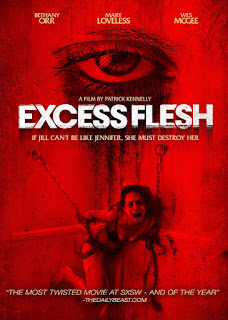 The Film
Jill is jealous of her beautiful roommate Jennifer who works in the Los Angeles fashion scene and is a social butterfly, rarely staying home each night. Jill is recently single and struggles with body issues and eating disorders and rarely leaves the house. Jennifer's constant verbal abuse masked as friendship eventually leads to Jill spinning out of control.

EXCESS FLESH has a beautifully simple idea at its core dealing with some of life's darker sides. Eating disorders, body image issues, and unhealthy and damaging relationships are all looked at in the confines of this picture. Director and co-writer Patrick Kennelly hammers home the importance of food in this picture, with almost every scene having some sort of cooking or eating often with obnoxious chomping sounds and tight close-ups on the food and chewing itself. It hammers the point home immediately and never lets it lighten up. 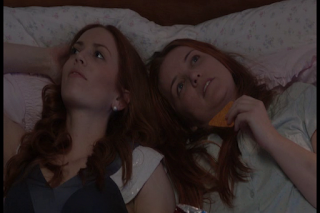 Bethany Orr does a wonderful job playing the damaged Jill. She lets herself get lost in the role and turns into a dirty, abusive and obsessive broken mind. Mary Loveless lives up to her last name as Jennifer who severely mistreats and takes for granted her friendship with Jill. Even if her intentions are good sometimes she's an immediate catalyst to Jill's fractured psyche. Both of our female leads are great in their roles.

The movie takes a turn from strictly psychological to more physical horror when Jill chains Jennifer to the wall and begins to torture her mentally and physically abuse her. The biggest problem i have with the film and it's a glaring one, is that eventually Jennifer escapes, bruised and obviously beaten wearing nothing but bra and panties and Jill, who is also in underwear and absolutely filthy, manages to talk her way out of a confrontation with the police and Jennifer never opens her mouth to ask for help. It doesn't ruin the film for me but I think this scene would have been better left on the cutting room floor because it does nothing to forward the plot and only serves to make the viewer bang his head against the wall in frustration.

Few movies are perfect, and fewer independent movies yet. EXCESS FLESH successfully tackles several psychological issues to make a horror film that is genuinely disturbing at times and even a bit depressing. A bit more restraint and subtlety may have made this picture a bit better but as it is I'm a fan.

The Audio & Video
Midnight Releasing's release of EXCESS FLESH is a standard but well done DVD with a 16x9 anamorphic widescreen transfer that has relatively good sharpness and detail level and natural color reproduction. A 5.1 surround sound track handles the English audio mix with no problems. Clarity is good and there are no problems with distortions. 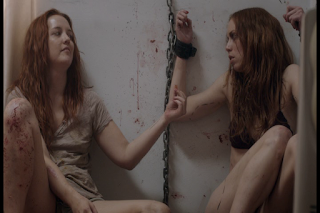 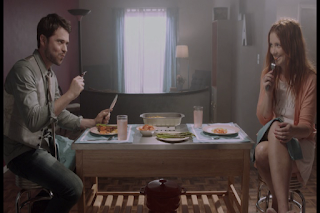 The Bottom Line
There are some things I don't like about EXCESS FLESH but they're vastly outweighed by those that I do. Recommended.