Hello dear readers! Another October is upon us and I hope you're all enjoying the fantastic fall weather (if you're lucky enough to have it) and that your 31 days of horror has started out with a winner! As you know October means the quest for at least 100 movies for better or worse. Somehow I've survived 8 years and move on to year 9 despite nearly throwing in the towel on the whole thing a couple years back. The fire is back (for now) and we're off to a strong start for day 1. 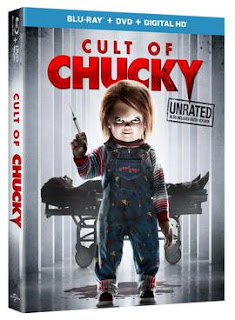 CULT OF CHUCKY is a direct sequel to 2013's Curse Of Chucky and takes a bit of a different turn from the rest of the franchise. We spend our time in a mental institute as Nica, the lone survivor from Curse, is going through treatment to deal with her experiences a few years prior where she's been blamed for murdering her family. Instead of one Chucky we get a handful of killer dolls running around as Charles Lee Ray has found a way to transfer his soul into multiple dolls at once. It doesn't make a damn bit of sense but it makes for some great interactions between the Good Guy dolls that were genuinely funny. This is one of the more violent and frankly fucked up movies in the series. Many of the deaths are gory (no yardstick beatings here), Chucky pokes fun at suicide, and there's decapitated possessed doll head torture. Not everything in the film works as it takes a bit to really get going, Tiffany Valentine's return to the series is a bit hamfisted and the movement on Chucky isn't great. Brad Dourif can still nail that voice though. There's a post credit scene that will have big fans of the franchise cheering and the whole thing leaves off on a note that could make for another follow up that's a bit different or leave things as they are for good. 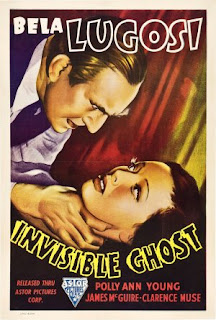 I don't have a ton to say about INVISIBLE GHOST. It's a fine 40s horror film starring Bela Lugosi as Dr. Kessler who's home is being plagued by a series of mysterious murders that leads to an innocent being put to death. The man's brother arrives at the Kessler home to solve the mystery that may have something do with Kessler's wife who was left with brain damage after a car accident. This one isn't very interesting but has really great performances especially from Clarence Muse as the butler. It's decent but nothing particularly special. 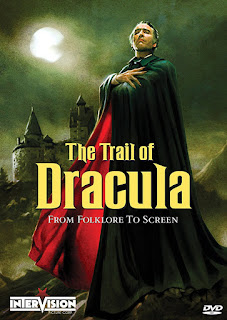 After a day of absolutely terrible football I returned to the challenge with the 2013 documentary THE TRAIL OF DRACULA which takes a look at the origins of the character and his literary and cinematic presence and history. It features commentary from various experts and film critics, most notably to me Kim Newman, along with archival footage from Bela Lugosi, Christopher Lee and others. It offers good information and spends a good bit of time on each point the film makes until we get to the modern post-Hammer era which is quickly glazed over at the end. Big Dracula fans may not find a ton of new information but it is well put together and it is definitely worth a watch. 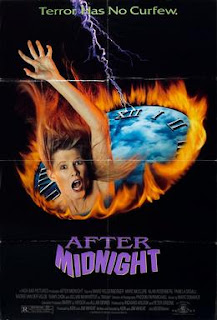 Day 1 closes with the 1989 anthology film AFTER MIDNIGHT which starts out with a college professor showing his class the power of fear on their first day. After making the class asshole piss himself in fright his teaching methods come in to question so he invites the class to his home to continue with his anti-textbook methods and this is where the different stories start with three different students telling stories to bring out the fear in their classmates. These involve a surprise party going wrong and ending violently, a group of girls getting stranded in the wrong part of town and dealing with a derelict and his attack dogs, and a phone operator being stalked. I don't think any of these stories are amazing but I did enjoy each of them despite the one with the dogs running long and the phone operator segment being extremely predictable they all work in spite of their flaws. The wrap around segment works well to tie it all together in an original and meaningful way without being a throwaway segment meant simply as a way to get the other films introduced. It also gives us the film's most memorable scene even if it jumps the shark with a stop motion skeleton scene that enters total schlock territory. The finale in the professor's basement is also one that I don't think I'll be forgetting anytime soon.

Haven't seen Cult of Chucky, yet. Hopefully soon. I have seen The Invisible Ghost and it is okay. The documentary looks great, I will be checking that out. And After Midnight also seems like something I'd like. Thanks for posting these!