Only a pair of movies for day 5, though I technically get to count one twice since I watched it with and without commentary... score. 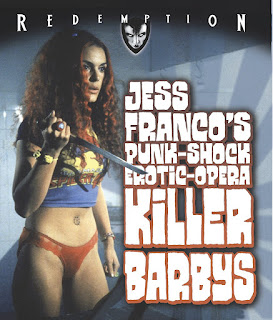 By 1996 Jess Franco had more or less made every type of movie you could imagine so he decided to make his own version of Scooby Doo. I actually have no idea if that was his thought process but somehow I doubt it. Either way KILLER BARBYS is very much Jess Franco doing Scooby Doo with an alternative/punk band from Spain called The Killer Barbies... yes, apparently Mattel made them change the spelling of the film's title (but had no problem with the bands name). After an opening performance scene by the band which is reminiscent of Franco's love of including scenes in jazz clubs in his films the band gets stranded outside an old gothic castle and are invited in for the night. Most of them take up the creepy butler on his offer while two of them stay in the van to have seemingly endless wild sex. The castle has a few little minions running around creating all sorts of trouble and collecting ears and other weird things. Heads get lopped off, blood flows and the countess of the castle has an extended scene of rolling around in blood and sweat after fucking one of the band members. The movie is as much a music video for the band with their songs blasting through most of the movie as it is a gothic horror film. It's a very hit and miss affair but Franco creates some incredible atmosphere at times, especially around the exteriors of the castle and even at its worst it is still interesting and definitely worth a watch if you're at all interested in Jess Franco films. 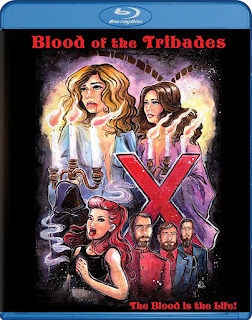 Euro horror fans will want to take note of BLOOD OF THE TRIBADES which is a love letter to the sexy lesbian vampire films of the 60s and 70s with a feminist and female empowerment foundation. The story is muddy and convoluted which is the film's weakest point but the general idea is that 2000 years ago Bathor established the land and left and violence has broken out as all of the men have been stricken with a strange disease leaving them with sickly blood spots all over them. They blame their condition on the vampire women of the land and wage war on them, staking them and shooting them with arrows whenever possible. A pair of lovers band together with others and try to stop the war and bring peace before Bathor returns... or something like that. Here's the good - co-writers and directors Sophia Cacciola and Michael J. Epstein are definitely fans of the movies they're paying homage to. They deliver a nicely shot film filled with stunning locations, incredible costume work, and some beautiful set design. The girls are gorgeous and the skin factor would rival anything from Jean Rollin. The effects are simple but effective. Here's the bad - The acting is uneven, while some performances are good there's a lot of rough ones which isn't surprising for an indie film but it does hurt the movie. I've already mentioned the writing but I have to mention it again, there were points where I just had no idea what they were talking about. And there are points in this movie that feel remind me of early 2000s indie horror and not in a good way. The direction and overall look of the film takes a dip in these scenes and it feels like they just plain ran out of money. The sets are noticeably less stylish and void of the great look throughout the rest of the movie. The direction felt less stylish and more of a rush job to hurry up and finish which would make sense if there was a problem with money during these scenes. I can't say I loved the movie, I'm not even sure I'd say I really liked the movie but I admire it and I do love the effort and passion behind it. This could have been a train wreck trying to recreate the look and feel of those amazing Euro films from the past but hats off to Sophia Cacciola and Mike Epstein for getting more right than they did wrong.
Posted by Celluloid Terror (Seth Poulin) at 7:43 PM