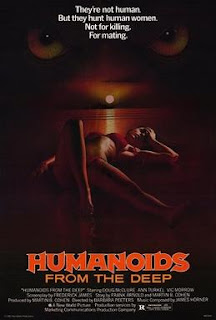 Day 4 was the busiest day of the month so far but unfortunately it was more bad than good. At least it started out strong with HUMANOIDS FROM THE DEEP which was my first re-watch of the month. I spent most of the day watching these movies with a buddy and asked for a good creature feature and having never seen this one I had to introduce it to him. He loved it. And for good reason. This Roger Corman production is trashy and gory, violent and sleazy. There's blatant racism against Native Americans, sea monsters killing and raping women, blood and guts being spilled and plenty more good natured fun. The carnival scene is classic and your life will be better having seen this movie. 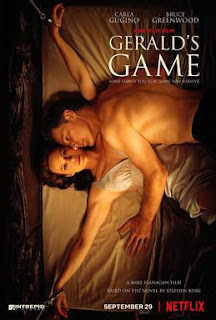 Mike Flanagan's new movie GERALD'S GAME, adapting the Stephen King novel was next. This Netflix production was really solid stuff. Carla Gugino is fantastic and every bit as good as she needed to be for the film to be a success. This is a tight psychological and survival horror that suffers from a final ten minutes that feel tacked on for no good reason than to extend the runtime. I have not read the novel so I can't comment on whether it works better in that format but I didn't care for it at all in the movie. Mike Flanagan has been a hot name in horror over the last few years and to be honest I never understood why. I think the majority of his directorial work is passable at best and some I just plain didn't care for. GERALD'S GAME is my favorite thing he's done so far even with the ending scene that I don't care for. 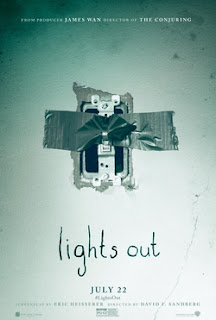 This is where the train came off the rails and our day went downhill fast. Often times I get curious about a movie even when it looks like absolute shit and I remain curious about it, at least mildly, until I see it. That's the case with LIGHTS OUT, a feature film based on the director's short film of the same name from a couple years prior. This movie involves a ghost that is haunting a woman and her family that can't enter the light but in the darkness and shadows is quite dangerous. This movie was awful. The backstory to the ghost is shit and doesn't even make sense when you really think about it. It only exists when the woman let's it exist in her mind which would suggest it's merely a psychological thing with the mother but the ghost physically manifests itself and harms people so it obviously isn't just a product of the woman's mind. Except it is? And throughout the entire movie as soon as it enters the light it simply vanishes but at a key moment during the climax the kids shine a light on it and it begins to burn the ghost? Fuck off with your lazy continuity for the sake of convenience. LIGHTS OUT sucks eggs. 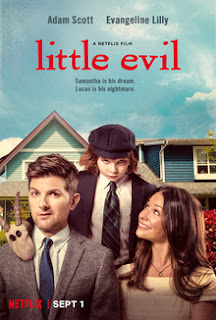 Changing things up a bit to hopefully lighten the mood and bring some fun back to the day we picked out another new Netflix production - LITTLE EVIL. This comedic take on The Omen features some spoofing on other classics such as The Shining and Ghostbusters among others and stars Adam Scott who is a pretty funny guy. Scott stars as a newly wed stepfather to a creepy young boy who looks just like Damien from The Omen and has all sorts of deadly and tragic events follow him. Eventually it becomes evident that his son is the antichrist and something must be done to stop him. Unfortunately I didn't find most of LITTLE EVIL to be funny. Most of the jokes fell flat and then some totally bombed when they were repeated later. The characters try their best to be funny but the writing just was not funny the majority of the time. The movie wasn't awful and I'd even say to give it a look if you're interested or intrigued by it because it might work for you. It's not awful and it was a step up from Lights Out but there's nothing funny about an unfunny comedy. 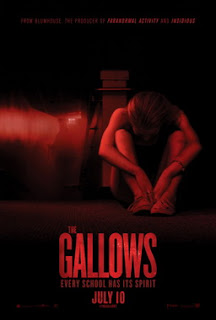 I'd happy watch Little Evil again if it meant I could wipe the memory of THE GALLOWS from my mind. Hell even Lights Out was better than THE GALLOWS. Fuck this movie filled with cookie cutter stereotypical douchebag high school characters. Fuck all of the awful generic found footage bullshit within. Fuck the stupid backstory about a boy that accidentally died from hanging in a school play in 1993 and taking his revenge from the grave on the son of the boy who called in sick to the play 1993 which put him in position to play that part. The twist sucks. The second twist sucks. The ending sucks. I won't even say I dislike the characters. I hated these characters. I wanted to cheer their deaths and demise so bad but it was all so weak and uninspired. If you can't tell that i hated this movie let me tell you again - FUCK. THIS. MOVIE.
Posted by Celluloid Terror (Seth Poulin) at 2:33 PM