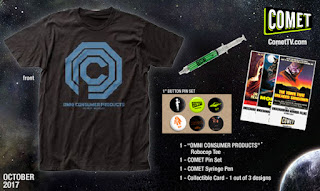 This October there is so much happening on COMET TV!
First up, The Robocop trilogy is airing Saturday, October 21 and Thursday, October 26! Who doesn’t love Robocop, talk about classic sic-fi!
Then, there’s the Underground Horror series airing throughout the month of October! Check out the schedule at CometTV.com/underground-horror
There is something for everyone!

The Comet TV October pack pack has:
1 -Robocop Omni Consumer Products T-shirt: A perfect T-shirt for out and about and to show your Robocop love. It sports the famous Omni Consumer Products logo on the front and looks amazing on!
1 -Limited Edition COMET TV Card: You’ll get 1 of 3 limited edition designs that feature one of the Underground Horror Titles showing this month on COMET TV!
1-Limited Edition COMET TV Pin Set: There’s nothing better to add a little flair to any ensemble that this limited edition COMET TV pin set. It features six different designs including Stargate and Andromeda.
1 -COMET TV Syringe Pen: Oh the horror! This green liquid syringe pen will have you the envy of everyone in your office. I mean let’s be real, who else has a COMET TV green liquid syringe pen? The answer… It could be you!

TO ENTER:
1. Send an email to CelluloidTerror@yahoo.com and include your full name and address (US only!)
2. Tell me your favorite scene from any Robocop movie!
3. Winner will be selected on Halloween!

About COMET TV - October 2017
ROBOCOP TRILOGY
Robocop (1987)
Robocop 2 (1990)
Robocop 3 (1993)
Saturday, October 21 Starting at 10P/9C
Thursday, October 26 Starting at 4P/3C
--------
NEW ON COMET IN OCTOBER
Andromeda
Classic Space Opera is coming to COMET! Based on materials from sci-fi legend Gene Roddenberry, Andromeda stars all action hero Kevin Sorbo as the Captain of the Andromeda Ascendant, a highly advanced ship whose crew is charged with restoring power and stability to the Systems Commonwealth. But, to succeed the Andromeda crew must battle one of sci-fi’s weirdest looking bad guys....the sinister Magog!
Weekdays at 2P/1C and 10P/9C
Stargate: Atlantis
If you thought gate-hopping action was fun in the Milky Way, just wait until you see what it’s like in the Pegasus Galaxy. Stargate: Atlantis sees a team of international scientists unlocking the secrets of a legendary ancient city, discovering a whole new stargate network in a whole new galaxy, and bringing them face to face with the Wraith, a powerful enemy who are best summed up with the term 'Evil Space Vampires'!
Weekdays at 3P/2C and 11P/10C
--------
UNDERGROUND HORROR
October, demons, blood guts and gore, that’s what the month will bring to viewers. Join COMET TV for a horror retrospective of some of the most ingenious films, sure to scare the most die- hard fans of the genre. From classics to contemporary, COMET TV has them all.
Airing daily throughout October, check schedule at CometTV.com/underground-horror