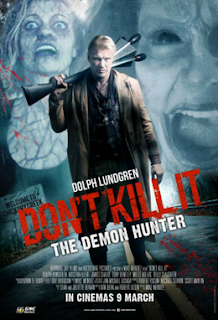 Sometimes Netflix will surprise you and you'll stumble across something unexpectedly good. That happened with DON'T KILL IT. Dolph Lundgren stars as a demon hunter tracking a demon that moves from victim to victim whenever the person it is inhabiting is killed and it moves on to the killer. This makes it tricky as the demon has superhuman strength and isn't afraid to die, you must trap the demon to stop the carnage. And there's a lot of carnage. The kills in this movie send blood splattering everywhere. It has a good energy, Lundgren is funny but tough, and Kristina Klebe is a good co-star to him. The demon is a bit generic in its screeching screams, black eyed presentation but the movie is a good way to turn your brain off for 90 minutes and watch a fun action horror flick that absolutely flies by. 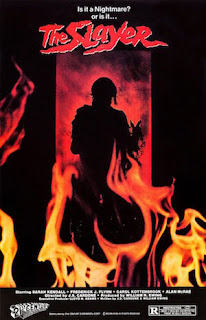 Next was THE SLAYER, a slasher with its feet planted in psychological horror set on an abandoned island in a creepy old beach house. It's a bit slow with a small body count but it has a good eerie feeling, a naturally creepy setting and some nasty kills. I hate to say that I let my preconceived notions of what to expect were wrong (thanks to the artwork) and I did find myself a bit let down because of that but still liked it. Knowing what to expect on future viewings will definitely allow me to settle in and watch it for what it is instead of waiting for what I expected it to be to not happen. 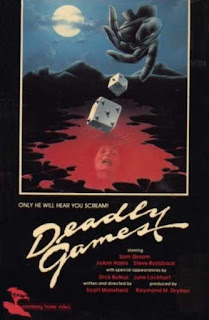 The Slayer may not have been what I was totally expecting then came DEADLY GAMES from 1982 that I just don't have a fucking clue what anyone in this movie was thinking or why it was made. This is a mystery slasher where Keegan Lawrence (don't worry, every character in this piece of shit is constantly referred to by their full name) returns home to solve the murder of her sister. That's the plot but good lord it's a disaster. Chicago Bears legend Dick Bitkus is here with a speaking role and plays football. There's a character that reminds me of Kelly Leak from The Bad News Bears who is a constant third wheel on dates. The copy I watched randomly broke in to German and Spanish language tracks but it doesn't matter because there wasn't a damn good thing about this piece of shit. DEADLY GAMES feels like it is at least 2 and a half hours and it's as dull as a dollar store knife. What a pile of shit. 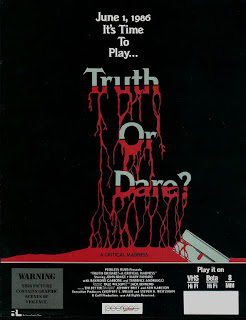 More Tim Ritter is always welcomed, especially when I was righting a wrong and finally seeing TRUTH OR DATE: A CRITICAL MADNESS - something I had only seen a handful of scenes from before. What is there to say? It's mid 80s shot on video madness. Gory, stupid, cheesy and just a fantastically fun time. 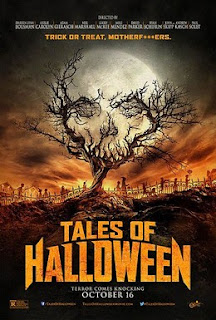 The night came to a close with TALES OF HALLOWEEN, the 10 part anthology film from 2015 that I liked a lot on my first viewing. The good news is that I still like it. The bad news? Well I guess it's not really bad but I don't like it quite as much as I did. It tries to put together a similar look and feel to Trick 'R Treat but it's not on the same level as that modern classic. It's still more hit than miss and I suggest checking it out this Halloween season.
Posted by Celluloid Terror (Seth Poulin) at 2:50 PM