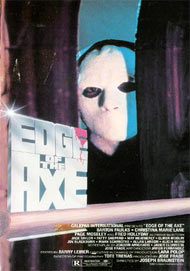 Are there any movies you see being swapped among collectors that have always caught your eye but you know nothing about? That is EDGE OF THE AXE for me. I really don't have any past with it from my early days in video stores, I'd never seen it before and other than knowing it was a slasher film by Jose Ramon Larraz, a director whose work I really dig, I know nothing about it. Well, I know it only has a VHS release and is a sought after release. Now THAT is all I knew about it. Now I know it was apparently made for TV, features a boring love story subplot and the most obnoxious 80s computer chat program I've ever heard. That said, I love the killer's mask that reminds me of Dustin Rhodes when he left WWF as Goldust and WCW saddled him with that shitty Seven gimmick that he shat all over. The kills aren't inconic but they're bloodier than I'd expect for a TV production. The acting and script are hokey but it works as a slasher movie and I had a bit of fun with it. I wouldn't rush out to see it and I certainly wouldn't pay big bucks in a VHS collector's market but if you get a chance to see it and enjoy 80s cheese, go for it. 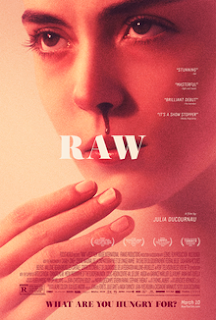 Then there's RAW. Oh,  RAW.  This is a French film that has been receiving exceptionally high praise for months as a masterpiece of meaningful and disturbing horror. Well I'll give it this. It's a really fucking well made movie. It's beautifully shot. The performances are excellent and the make up effects are incredible. But here comes the but. But, I just didn't find anything to connect with. I didn't find any meaningful message. I didn't get hit hard by anything deeper than a superficial level and I certainly didn't see it as a groundbreaking masterpiece. There may have been some metaphors that didn't hit me or that flew totally over my head but everything I saw was straight forward and I got it but it was hollow. Feel free to tell me I'm stupid and missed the point, I'd like to hear about what I missed. 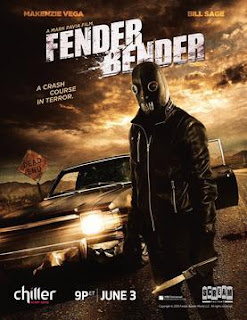 Do you remember the Stephen King adaptation The Night Flier? That came out in 1997, 20 years ago. It was directed by Mark Pavia and by most accounts it was a decent movie, nothing special but not bad in a time when King adaptations weren't always quality. It's been two decades since we've heard from Mark Pavia but he has returned with FENDER BENDER, a suspenseful home invasion horror film with a creepy killer. Is it a new or innovative idea? Nope, but it damn sure is an effective movie. FENDER BENDER has a cast that total in the single digits and the rest of the film is just as tight. A small auto accident leads to a night from hell with a deranged killer who wears a mask straight from a S&M Slipknot concert from hell. Pavia creates suspense and tension throughout with memorable and meaningful deaths without having to rely on gimmicks. It's not a perfect movie and it isn't innovative but damn it was rock solid. If this is what Mark Pavia is bringing to the table I warmly welcome his return to filmmaking.
Posted by Celluloid Terror (Seth Poulin) at 2:10 AM