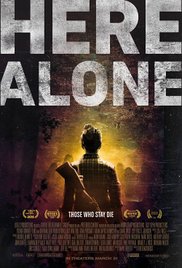 Are you in the mood for a painfully generic, been-there-done-that post-apocalyptic survival movie? Well then you're in luck because that is exactly what HERE ALONE is! Some sort of viral outbreak has wiped out large amounts of the population and it has left a woman all alone in the woods. During flashbacks we learn of the outbreak and what happened to her husband and new born baby. Eventually a father and daughter cross paths with her and they survive together for a while before they decide to stray from what has been working for them to try something new which nearly leaves everyone dead. The acting is good, the direction is competent and the movie looks good but there's not a single solitary thing that makes it exciting or stand apart from the hordes of similar films. It's like watching a feature length film version of the absolute worst stretches of The Walking Dead TV show. 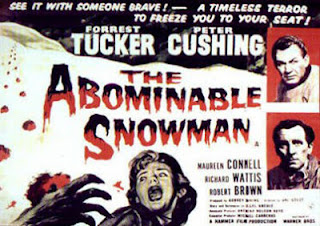 There's plenty of Bigfoot movies out there but how many Yeti movies? Well there's at least one good one in the Hammer production of THE ABOMINABLE SNOWMAN from 1957. Now, I will admit this one left me a bit disappointed. I really wanted to love it. I even expected to but the movie lacks a couple signature moments that would have brought it from good to great. Also I think it would have benefitted from being made a few years later. I consider 1958 to be the year Hammer broke big with Horror Of Dracula and their studio flourished in the years following it. I think the bigger budget would have allowed for those signature scenes that come to mind whenever you think of the film. I also think had it been filmed in color would have made it more interesting visually even if the majority of the film takes place in the snow covered Himalayas there are plenty of scenes in towns that would have screamed with color. That said, it's a really solid horror movie that uses plot devices I wouldn't have expected from a Yeti movie. It's well made and the cast is excellent (no surprise there). 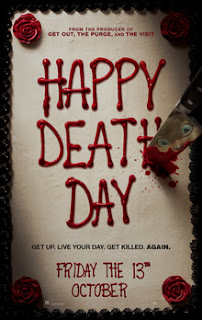 And for what may be the biggest surprise of the month so far... HAPPY DEATH DAY. I hated everything about this movie's ad campaign. I hated the Groundhog's Day time loop plot, I hated the killer's stupid baby mask, I hated the 50 Cent ringtone that was played over and over and I was sick of that song a decade ago. I hated that the movie felt dated, which I came to find out was for good reason since the development of this movie started 10 years ago until it was actually made. This looked like it would be painfully boring, generic watered down bullshit and the PG-13 rating certainly didn't help ease my fears but we live in a time where I can see as many movies at the theater as I want for the low price of $9.99 (how much!?) so I'm pretty sure I literally said "Fuck it" to myself and went to see it. And you know what? It wasn't awful. It's no classic and I wouldn't sit through it again. It is watered down and I still hate the mask but they at least made an attempt to give that mask some sort of meaning. And somehow they found a more annoying ringtone to play a hundred times than the one used in the trailers but this movie has a sense of humor and a good one at that. It was a fun movie to sit and watch even if I had it all figured out pretty early on. The cast was decent and the lead guy and girl had good chemistry together. It was nice to see actual character development from a slasher film and have a couple characters actually worth getting invested in. You can tell that any edge the movie may have had was taken away by the PG-13 rating but maybe an unrated cut will be different (you'll have to let me know). I wouldn't suggest rushing out to see it but I  got some good chuckles in and was never bored. That's way more than I ever expected. 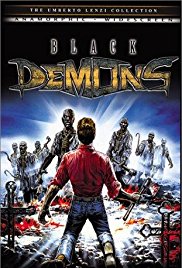 Unfortunately news broke early the morning of day 19 that Italian director Umberto Lenzi had passed away. Lenzi had directed some really fine films in many different genres including a few great gialli, some of the goriest cannibal and horror pictures you'll ever see and perhaps the best of the best Euro crime films. Seriously, if you're to seek out anything the man did give his polizziotteschi a look. I had to give the Maestro a memorial viewing and I decided to go with one I hadn't seen in probably a decade. The gory tale of racial revenge, BLACK DEMONS. This one was released in 1990, a few years after the golden years of the Italian splatter period so it gets a bit overlooked, it's also not an amazing movie by any means but it gets the job done well enough to set up the kill scenes that we're here for. A group of blinded and murdered slaves in Brazil have returned from the dead to avenge their deaths on 6 white victims and they're not nice about it. Hooks, chains, cleavers and more are used to blind, maim and kill. It's a bit slow in chunks but I have fun with it and think the payoff moments make it well worth your time.
Posted by Celluloid Terror (Seth Poulin) at 10:29 PM