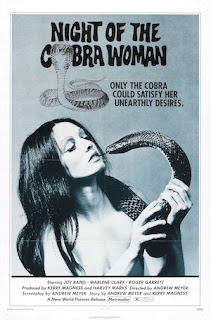 Snake horror is cool. Snakes can be scary and sexy which makes them perfect to base a horror movie around. The movie still has to be good though, snakes can't carry the whole thing, at least not in a movie like NIGHT OF THE COBRA WOMAN which features a priestess using special cobra venom to stay young while she sucks the life out of men she sleeps with. She sheds her skin like a snake which makes for some of the grossest moments of the movie. Just imagine peeling a scab the entire length of you leg... ew. The movie has a couple snake bite moments, some nicely designed sets and a lead that fits her role perfectly but there's really not much going on. I certainly didn't hate the movie but this 75 minute movie feels like two hours and there was plenty of room to add some more schlock, especially for a movie produced by Roger Corman. At least we get to see Vic Diaz lurking around being a creep like nobody else in the Philippines could. 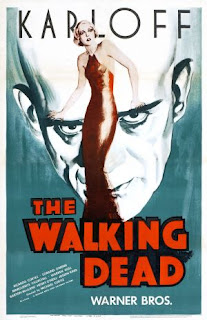 A pair of Boris Karloff films were up next starting with THE WALKING DEAD from 1936. It's better than the AMC show. Karloff stars as a man framed for murder of a judge that sentenced him to ten years in prison a decade earlier. Shortly after being put to death scientists bring him back but he's far from the same man that went to the chair. He's in a zombie like trance with only revenge for those that wronged him in his mind. It's a straight forward movie from Michael Curtiz filled with solid performances. Not a classic but a very solid mid 30s horror flick. 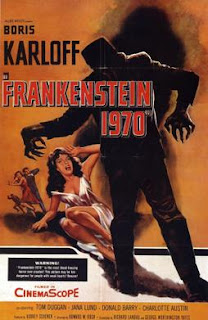 FRANKENSTEIN 1970 is a movie I was long curious about and finally getting to see it I can't say I'm disappointed. Boris Karloff stars as the last living Frankenstein and in true Frankenstein tradition he is carrying on the science experiments that his ancestors began a couple centuries earlier. The problem? He's broke. So he rents out use of the Frankenstein estate to a movie production company and uses the ample supply of bodies for his experiments. This one was made in 1958 but feels like a movie from at least a decade earlier. It has all of the traditional creepy mansion/castle tropes like hidden passages, creepy family crypts, spy pictures, and of course a laboratory. The lab is the part of the movie that is distinctly late 50s with a very space age design to the set pieces to a film that has an otherwise eerie gothic feel. The biggest disappointment of the film is the monster's look which is a man who is covered in bandages and shambles around with a giant square head that essentially just looks like $20 worth of gauze wrapped around some cardboard boxes in the shape of a person. It certainly doesn't ruin the movie that I'm surprised I don't hear more about.
Posted by Celluloid Terror (Seth Poulin) at 1:08 PM