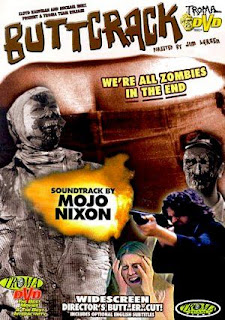 What's there to say about BUTTCRACK. It's a movie called BUTTCRACK where gazing upon an evil undead buttcrack will turn you in to a zombie. Sounds stupid, right? Well it is. It's really fucking stupid. And it's pretty damn funny. Mojo Nixon is great as Preacher Man Bob and did a good job handling the music. If you're a fan of stupid fart joke comedy horror films, from Troma in this case, I recommend it. 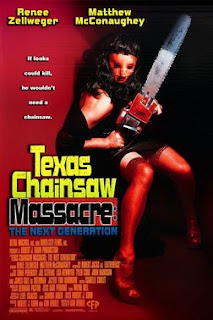 Then it was time to revisit a couple films that I haven't watched in a decade or more. First was TEXAS CHAINSAW MASSACRE: THE NEXT GENERATION, the much maligned fourth film in the series that stars a young Renee Zelwegger and Matthew Mcconaughey. Well, the film didn't get any better and it's actually duller than I remember. There's a couple of things I enjoyed about it like the RV chase scene which is really just a lesser version of opening bridge scene from part 2 but I'll take what I can get here. I also thought Mcconaughey gave a really good performance as the main antagonist. Otherwise the movie is pretty crappy and that's all I have to say about that. 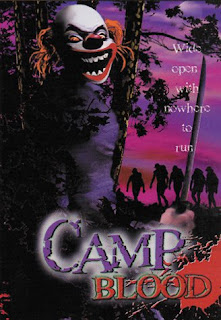 CAMP BLOOD was next, a 1999 shot on video slasher film from Brad Sykes who is no stranger to the shot on video world. There's really nothing about this movie that I should like, it's a generic Friday the 13th ripoff with a janky looking clown mask killer stalking the woods surrounding a camp that have been nicknamed Camp Blood which apparently nobody enters but are covered with graffiti. The acting is poor but the special effects are okay. Something about this movie works for me at least on a minor level. I'm certainly not a lover of this movie but to my own surprise I still found myself entertained by it all these years later. It may be the rawness of it and how it looks and feels like something I would have made with friends in high school if we could organize anything but no matter what it is about it that speaks to me I think it's an okay watch even if its not a good movie at all.
Posted by Celluloid Terror (Seth Poulin) at 12:48 PM

pull your goddamn pants up you retarded son of a dickwad! come on buttcrack

there's a rock n roll demon and he's coming for your soul!