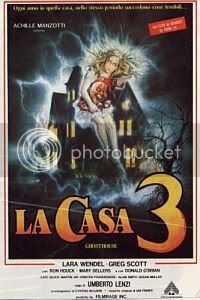 Ghosthouse is a part haunted house, part slasher horror film from Italian director Umberto Lenzi. It starts out in typical slasher fashion with a few kills to get the ball rolling and set up the rest of the movie. Skip ahead 20 years and we are ready to get going. A college radio host records a transmission of a man yelling for help and a girl screaming. When they track it to the old house they find a few young teens on vacation crashing at this house. They play the tape for them and they find that its the vacationing teens voices on the tape, they also discover the town crazy who is contracted by the county to look after the now abandoned house. Everyone involved has very weird and at times demonic experiences in the house. All of which are accompanied with a creepy (and pretty good) theme, which usually spells the end of someone's life.

This movie was filmed in the same house that Lucio Fulci used for House By The Cemetery and it's real life atmosphere of an old abandoned house adds to the whole feel of the movie. While being undeniably cheesy, it still manages to be creepy. The dialogue and acting are beyond bad, and so is the the reasoning and decision making of the characters. This has come to be accepted in most Italian productions, and doesn't take too much away from the film itself.

Ghosthouse was originally named LA CASA 3 to play on the success of The Evil Dead series in Italy as they were called La Casa. In other markets it was renamed Ghosthouse. This is little more then a haunted house/slasher film, and you shouldn't expect a masterpiece of Italian Cinema. An almost by-the-numbers slasher film where you are waiting for the next victim to get picked off and hear the theme song again, thats part of its charm. Its so bad that its good and that its why I love it.
Posted by Celluloid Terror (Seth Poulin) at 2:12 PM