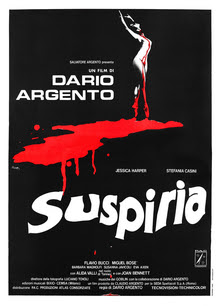 Suzy Banyon (Jessica Harper) is a New York native, going to Germany to study at one of the most prestigious dance academies in the world. Things are weird from the start, from a girl yelling and running away from the school as she pulls up to the building to being denied entry. The next morning when she does get in there is word around the school that the girl that ran away was murdered during the night. No one at the school thinks too much of it as they all have a lot of work to do.

As Suzy is introduced to everybody and begins to feel comfortable at the school she has a spell of dizziness and faints while dancing. The school's doctor puts her on a strict diet which she must eat alone in her dorm room. Every night after eating Suzy becomes very tired and falls into an almost comatose state of sleep. Her roommate Sarah was friends with the girl who was murdered and began to discover things about the school and its leaders with the other girl, such as hearing footsteps in the middle of the night and whispering. Suzy and Sarah find a pattern in the amount of steps and the direction on a nightly basis. Before she can tell Suzy the rest of the details she is stalked and eventually murdered. The heads of the academy claim she left early in the morning without notice.

Suzy doesn't buy it, and begins to put pieces of the puzzle together in her mind and what she discovers is a world of the dark occult fueled by a 200 year old black witch.

No plot outline or review of the film can truly do Suspiria justice. The way the music has a life of its own and the way the lighting is not only beautiful but creates an atmosphere of tension and dread may never be duplicated. The acting is possibly the best of any Argento film.

Argento wanted the students at the academy to be no older than twelve, but the studio and producer (his father Salvatore Argento) thought such a violent film dealing with children so young would be banned or heavily cut. There are many subtle things that work with your subconscious in achieving you to feel they are younger, such as the doorknobs being placed up towards the head so they have to raise their arm to open the door as a child. Or sections of dialogue that are very childish (the "snake" scene in particular).

Suspiria is part story of the occult, the first of his trilogy involving the 3 witch mothers, and part giallo which he is a master of. While it is arguable that Argento's direction may have been better in some of his other films of this era, none were as complete in every aspect of the film. From the score, to the lighting, to the magnificent set pieces, this is a masterpiece of horror. My only wish is that I could see it again for the first time.