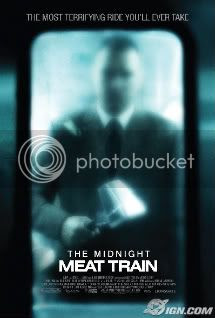 Let me start by saying that what Lions Gate did to this film was disgusting. Intentionally screwing over a film's chance at success by dumping it into only discount and second run theaters is not only wrong but a terrible business move. While we may never truly know what happened between Clive Barker and Lions Gate but its all water under the bridge now and what happened happened. When you get the chance to see this movie, take it.

Midnight Meat Train follows Leon Kauffman (Bradley Cooper), a struggling photographer into his journey to the darkness that lies in the depths of New York. When a friend introduces Leon to New York's most prolific photographer (Brooke Shields) he has the opportunity of a lifetime to get into one of her shows. He sets himself on a mission to get three really great shots that show off the real New York.

He heads into the subway station late at night, only to find a young model being harassed by a few gang members. He begins to take their pictures and when he gets the shot he needs he intervenes by pointing the security camera and the gang leaves without further incident. Kauffman continues to snap the model's picture as she boards the train.

When the model goes missing that night, Kauffman begins to put together conspiracy theories that lead him to following a man we come to know only as Mahogany (Vinnie Jones). Mahogany is a butcher working in a large butcher shop. Kauffman's life becomes consumed with following Mahogany in every aspect of his life. When Kauffman's fiance (Leslie Bibb) gets fed up with his mental decline due to this obsession she begins to do her own investigating.

What ensues is a train ride that joins the lovers in a battle against a heartless killer and a group that does dirty work for all mankind in order to keep an ancient secret.

Without giving away spoilers of MMT, that's the film. Its a very stylish, suspenseful and unrelenting film. There is no shortage of gore (even if it is CGI) and there is no letting up once it starts. The sheer brutality of the violence was quite surprising since many modern day horror movies shy away from it or sugar coat it. The atmosphere of the film is dark, and you will feel what the characters are feeling.

Ryuhei Kitamura's direction is stylish and tight. The way that Mahogany's hammer is beautiful and polished rather then grimy really works with your subconcious. As if it were an instrument of surgery to save someones life rather than take it. Jones played his role perfectly, and Cooper and Bibb were great as well.

Its great to see another good film from Clive Barker, its just a shame that almost no one got to see it in a theater.

Thanks for reviewing, I really enjoyed this flick and I was interested in seeing if you were down with it too.