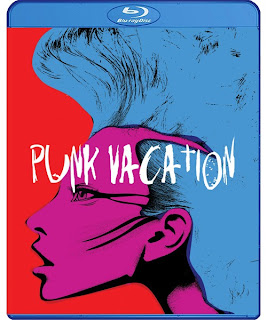 The Film
By 1990 the vigilante revenge film had dozens and dozens of entries and more than a few became legitimate cult classics. From Charles Bronson as Paul Kersey in the Death Wish series to the wonderfully gritty Exterminator, PUNK VACATION was a late entry into the popular genre that helped close the door on it.

When a young motorcycle riding punker is pissed off that a soda machine doesn't have orange soda and then eats his money without giving him his drink he begins unleashing his rage on the machine. The owner of the diner where the machine sits comes out, immediately shoving a shotgun into the youth's face, telling him to leave. The punk returns shortly, bringing his gang with him and they begin to torture the diner owner's young daughter and end up murdering the man. When the cops show up the leader of the gang, our extremely tight wound orange soda fan, is injured in the incident and brought to the hospital to heal while being watched by the police. After trying to get revenge for her fallen father, the diner owner's older daughter is kidnapped by the gang and tortured. This is where the movie really gets its meat and potatoes from as the small, tight-knit town tries to recuse one of their own as the gang of punks tries to do the same. It is a bit of cat and mouse from the punks and the desire for cold blooded revenge for the town which culminates in a wild shoot out climax in the hills of California.

PUNK VACACTION is an entertaining enough revenge story but never goes far enough to make it a must-see in the genre. The small town setting is never utilized as the punks stay out in the hills and woods outside of town. This is a missed opportunity as seeing them confront other townsfolk in their shops, restaurants and neighborhoods could have made for a more exciting and tense viewing experience. From a technical standpoint this was Stanley Lewis' only directing credit and he does a fair job at the helm of the film, but there are a few instances with awkward framing and poor focusing of the camera. The cast is a bit hammy at times, especially the punks early on in the film, who come across as more of a bickering group of teens than a vicious group of outlaws. They do eventually come around to become a nasty bunch, thankfully. 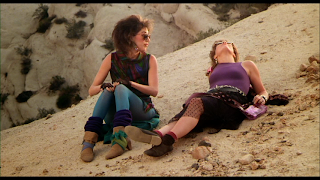 A bit fun, a bit violent, PUNK VACATION doesn't go the distance into exploitation classic but it does manage to be an overall decent and entertaining flick.


The Video
This Blu-ray/DVD combo pack is region free on both discs courtesy of Vinegar Syndrome and is another knock out for the company. The 16:9 anamorphic widescreen transfer is taken from a 35mm print and looks pretty damn good from start to finish, with flesh tones looking nice and natural and colors of the punk's wardrobe and makeup being vibrant but not too hot. There is a bit of dirt and debris throughout the film but it doesn't take away from the quality of the transfer. I didn't notice any nasty mess-ups with the transfer such as excessive DNR or edge enhancement.

Please Note: Screenshots taken from DVD copy of the film

The Audio
The audio portion of the disc also fares very well with a DTS-HD track that is free of any pops, crackling or hissing. 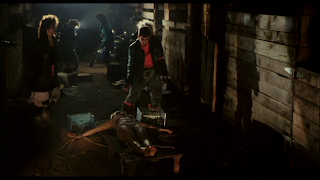 The Extras
Along with an extensive still gallery, there are a pair of video interviews with actor/producer Stephen Fusci and Steven Rowland (producer's assistant and stuntman). Both men provide some insights into shooting the film.

Oh and if that isn't enough there is a bonus feature film, NOMAD RIDERS. I haven't had a chance to check it out yet, but hell yes, what a great special feature.

The Bottom Line
If the entertainment value of PUNK VACATION wasn't enough, the high quality package that Vinegar Syndrome has put together should be. Oh yeah, the fact that you get a bonus film in the special features makes this one a no-brainer.