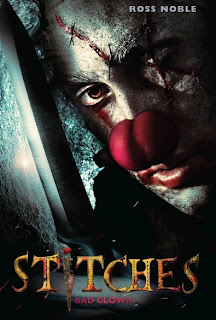 Stitches the clown is hired to entertain Tom and his friends at his birthday party. The rather nasty looking clown is ridiculed and taunted by the children who are more amused by their own jokes than his juggling and balloon animals. When a prank involving tying Stitches' shoelaces together goes wrong, Stitches ends up face down in the dishwasher with a butcher knife through his face, leading to his death. While spying on the funeral for Stitches Tom witnesses an ancient clown ritual inside one of the buildings and is discovered by the clowns who tell him that no clown who dies during his show can ever rest in peace until he can finish the show.

Six years later the kids are now in high school, having grown up and gone on to their separate cliques Tom is a quiet kid, with a long standing crush on Kate, one of the girls from his party. When his friends find out he will have the house to himself on his birthday weekend they plan a big party inviting everyone they know and then some. While the party rages on around him, Tom does his best to strike up conversation with Kate when a fake clown scare sends him crashing to the ground and cracking his head. The bigger problem is that an invitation to the party found its way to Stitches' grave and now he has found his way to the party to claim the lives of all the kids that were at the party where he lost his.

It is surprising how many horror movies have been made revolving around killer or evil clowns and how few of them are any good. STITCHES isn't anything groundbreaking but it does rise above many clown horror films and is an entertaining slasher flick. The special effects, part practical and part CGI are all well done, filled with blood and rather amusing. The cast is full of high school character cliches but everyone does a good job in their role from "emo" girl to gay boy and everything in between.

If you're looking for a new horror flick, or a slasher in particular, I suggest grabbing a bowl of popcorn, a few beers and a couple friends and enjoying STITCHES.
Posted by Celluloid Terror (Seth Poulin) at 10:47 PM